Xiaomi Mi Max 3 will feature a 6.9-inch Full-HD+ notchless display with 18:9 aspect ratio. It will be powered by Qualcomm Snapdragon 636 processor which will be coupled with 4GB RAM and 64GB of internal storage.

Xiaomi is all set to launch it next giant screen smartphone under Mi Max series – Mi Max 3 on July 19 in China. Now ahead of the launch, the retail box of the Xiaomi Mi Max 3 leaked online which has revealed the key specifications of the phone. Xiaomi Mi Max 3 is expected to come at least in Black and Gold colour options.

As per the retail box via GizmoChina, the Xiaomi Mi Max 3 will feature a 6.9-inch Full-HD+ notchless display with 18:9 aspect ratio. It will be powered by Qualcomm Snapdragon 636 processor which will be coupled with 4GB RAM and 64GB of internal storage.

Furthermore, the box also reveals that the Mi Max 3 will feature dual rear cameras of 12-megapixel and 5-megapixel sensors. The phone will come with MIUI 9 out-of-the-box instead of the recently announced MIUI 10 operating system.

Apart from the retail box, a photo has also been leaked by Slash Leaks which shows the “About Phone” section. It reveals that the Mi Max 3 will be powered by Snapdragon 636 processor. The new leak also reveals that the smartphone will feature a 6.9-inch display with a massive 5500mAh battery. 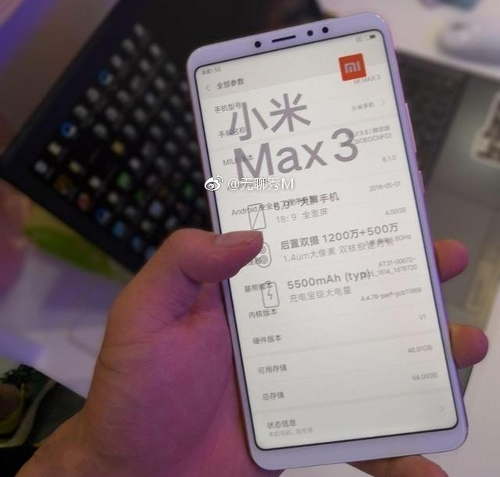 Along with the Mi Max 3, there will also bea higher-end variant of Mi Max 3 which is dubbed as Mi Max 3 Pro. It is speculated that the Pro variant will be powered by Snapdragon 710 chipset while the standard variant will come with Snapdragon 636. Other than the chipset, both the variants are expected to feature the same set of specifications.

Meanwhile, in a separate story, the Mi 8 Explorer will launch on July 24 in China at 10 AM local time. The Xiaomi Mi 8 Explorer smartphone was launched with the Xiaomi Mi 8 in May this year but availability was not revealed then. The Explorer Edition comes with 8GB of RAM and 128GB of internal storage and is priced at 3,699 (approx. Rs 39,000).