Xiaomi is said to be working on Mi 8 Youth and Mi 8 Screen Fingerprint edition smartphones in the Mi 8 series. Now the specs of the Xiaomi Mi 8 Youth has surfaced online on Chinese microblogging website, Weibo.

A Weibo user has shared an image revealing the specs of the alleged Mi 8 Youth. As per the leak, the Mi 8 Youth phone will feature a 6.26-inch display with 1080 x 2280 pixels resolution. This suggests that the phone will have 19:9 ratio and a notch on top.

Further, the new leak says that the Mi 8 Youth will feature Snapdragon 710 chipset which will be assisted by 6 GB RAM. The internal storage, though is not clearly visible in the leaked image. 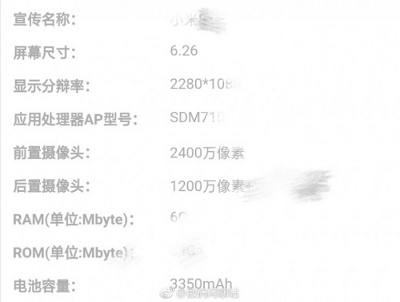 Meanwhile, a new Xiaomi smartphone with model number M1808D2TE has today also surfaced on TENAA, via MySmartPrice. The TENAA listing of Mi 8X reveals the same set of specs as of toady’s leaked specs of Mi 8 Youth Edition.