The post also mentions that the device will run on the upcoming MIUI 9.

Just yesterday we reported, some key details surrounding the Xiaomi Mi 5X. Now, Xiaomi has officially announced that it will be launching the mid-range smartphone on July 26.
Xiaomi posted a teaser on its official Weibo account, which contains an image of a known actor Kris Wu holding the device. The image reveals back of the smartphone, which confirms the dual rear cameras. The fingerprint sensor will be placed at the back as well. Further, the post also mentions that the device will run on the upcoming MIUI 9. This could also mean that Xiaomi will take the wraps off from its latest MIUI 9 during the launch event. 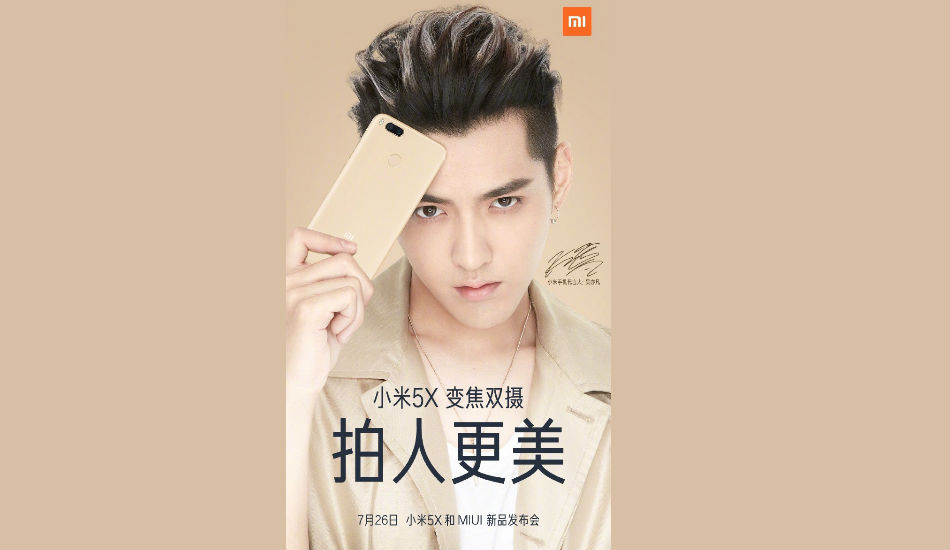 Previously, the leaked poster further reveals that the smartphone will come with a price tag of 1999 Chinese Yuan, which roughly translates to Rs 19,000. If the price tag is true, then it will compete with the likes of Oppo and Vivo, which are giving a tough competition to Xiaomi in Mainland China.
You might also like this:
Moving on, the smartphone is reported to be powered by a Qualcomm Snapdragon 625 processor along with 4GB of RAM. Interestingly, the phone was earlier reported to come loaded with a Qualcomm Snapdragon 660 chipset. Though the leaked poster seems to be some kind of promotional material, we still suggest you take this report with a pinch of salt. Lastly, on the camera front, the phone is reported to feature a dual-rear camera setup, though the camera sensors and their resolution is not known at the moment.
Note: Lead image is for representational purpose only