As Reliance Jio went from zero to occupying close to 36 percent on the feature phone segment, Xiaomi leads the charts in the smartphones market in India.

Major changes seem to be happening in the Indian mobile phone business as data from Counterpoint Research indicates that Xiaomi and Reliance Jio have toppled in their respective markets in India. While the Chinese smartphone manufacturer might be leading its market at over 30 percent, JioPhone has made its way to the top by capturing the feature phones market by the same amount.

Speaking about the smartphone sales in the country, Xiaomi has strayed past Samsung by taking the pole position at 31.1 percent of the market share while the South Korean manufacturer drops down to second place following Xiaomi’s success. The drop to the second positioned happened even after Samsung steadily increased their market share from 25.9 percent in last year’s first quarter to 26.2 percent in 2018’s Q1. This now brings to the surface how Xiaomi has taken over the share from other players in the Indian market.

Xiaomi’s success comes at the cost of Vivo and Oppo dropping down to around 5 percent a year after both these companies tasted fruit at over 10 percent each. It seems to have been a good year for Huawei as the Chinese smartphone brand as it enters the top 5 for the very first time after it closed in on a 3.4 percent hold in the market on year-to-year sales. With that, the Chinese brands’ hold on the market rises past 57 percent which is an all-time high since its increase to 53 percent last year.

Having said that, Samsung is still the best manufacturer to sell a premium smartphone for over Rs 30,000 due to the inclusion of the Galaxy S9, S9 Plus, and the newest A8 Plus. OnePlus follows the South Korean giant to occupy 25 percent share of the premium smartphone in the market share. This market could disrupt when LG launches the G7 ThinQ next week and Huawei aims to do the same with its P20 Pro launch in the country. 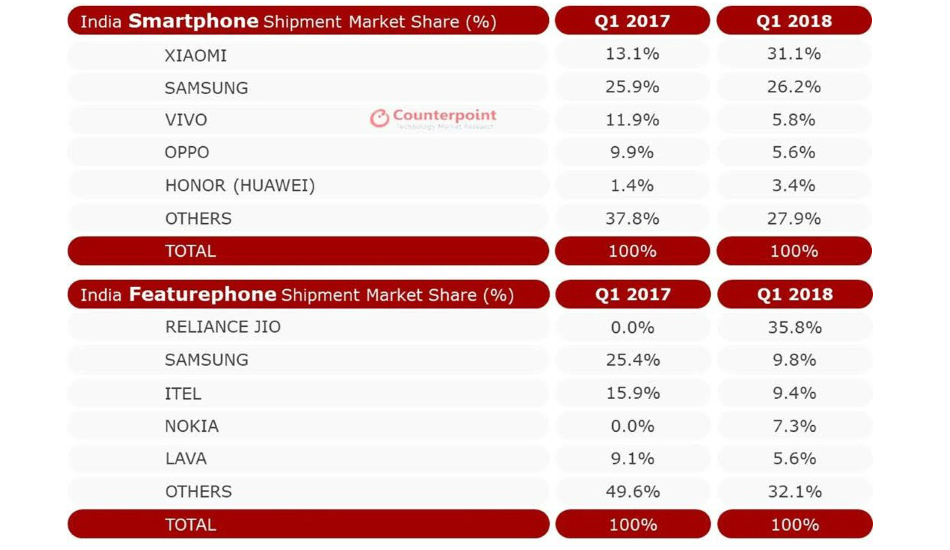 Moving on to the feature phones segment, Reliance Jio’s 4G-enabled JioPhone has closed in on its rivals by grasping close to 36 percent of the market share, followed by Samsung which again drops down to second. JioPhone’s demand has been bumped up due to the cheaper data rates for the feature phone where a user can enjoy unlimited voice calling and 1GB data per day for the whole month on a Rs 49 plan.

Jio’s rise means that a large base of 2G users has shifted towards 4G calling on the JioPhone. For Samsung, it appears to be a huge loss in the feature segment as it suffers a 15.6 percent drop in the market share which appears to have happened mainly due to the success of Reliance Jio. Nokia has made its comeback in the feature phone segment with a solid 7.3 percent growth which is just 2 percent lesser than third-placed iTel. With so much slated to have been going on at Lava, it’s market share has clearly failed to impress in the YoY report as it’s the last to feature on the top 5 feature phone segment.