iPadOS 15, iOS 15 and WatchOS 8 will be released on Monday, September 20 but what devices will receive it? Here's a list. 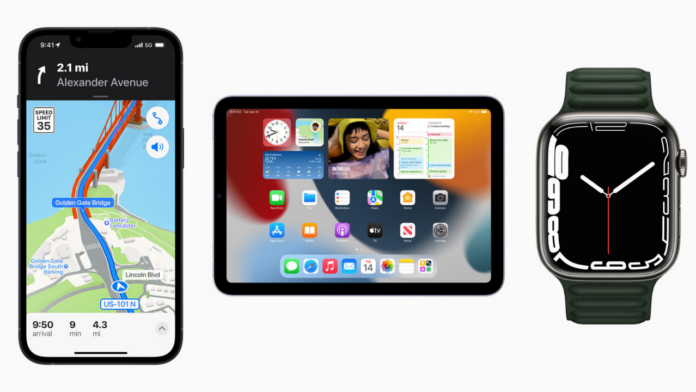 Apple announced a bunch of products at its California Streaming event yesterday. These products, including the iPhone 13 models, Apple Watch Series 7 and the new iPad, ship with the latest versions of software available from Apple, including iOS and iPadOS 15 along with WatchOS 8. But what about the previous products from Apple? When will they receive the updates, and what products will receive them? Let’s take a look!

WatchOS 8 is the latest version of the software from Apple that is specifically designed for Apple Watches. watchOS 8 debuts with an additional watch face designed especially for the larger display on Apple Watch Series 7.

The new Contour face takes the dial right to the edge of the display and fluidly animates throughout the day, emphasising the current hour. The new Modular Duo face leverages the extra screen area with two large, data-rich centre complications.

Separately, the classic World Time face, based on heritage watches and ideal for travellers, tracks the time in 24 time zones around a double dial. Apple says that this is available on Apple Watch Series 4 and later.

As for the availability of the watch OS 8 update, Apple says that it will be available for Apple Watch Series 3 and later. The software will start rolling out on Monday, September 20, and requires iPhone 6s or later with iOS 15 or later. Apple notes that not all features are available on all devices and in all regions.

This means that Apple is providing updates to all of its Watches that have been launched since 2017. Unfortunately, watch Series 2 and 1 will not be receiving the update. Hence, their software support has ended.

iPadOS 15 brings a bunch of improvements and new features to iPads. Multitasking is even more intuitive, with features like Split View and Slide Over. New widget layouts for the Home Screen and App Library offers simple ways to personalise the iPad experience and organise apps. Furthermore, Notes have now gone systemwide with Quick Note and offer new ways to collaborate and organise, whether typing or writing, with Apple Pencil.

The Translate app is now available on the iPad with new features that make conversations easier and more natural, including Auto Translate and face-to-face view. Live Text uses on-device intelligence to recognise text in a photo and allow users to take action. FaceTime calls now also get spatial audio and a new Portrait mode. And now, Group FaceTime provides the option to display participants in same-size tiles in a new grid view.

iPad Air 2 was launched back in 2014, while the iPad Mini 4 arrived back in 2015. So if you have any of these tablets or those launched afterwards, you can check for software updates on September 20.

Furthermore, the notifications have been redesigned along with Live Text support. Apple Maps have also been updated with new ways to navigate. There’s a new three-dimensional city-driving experience and walking directions in augmented reality.

The weather app has also received a makeover with full-screen maps and more graphical displays of data. In addition, the wallet adds support for home keys, and new privacy controls in Siri, Mail, and more places across the system further protect user information as per Apple.

iOS 15 will be available for iPhone 6s and later starting September 20. This means a total of 18 iPhone models will be receiving the update on the same day.