WhatsApp has rolled out the Communities feature globally alongside other features such as 32-participant video/audio calls and more. 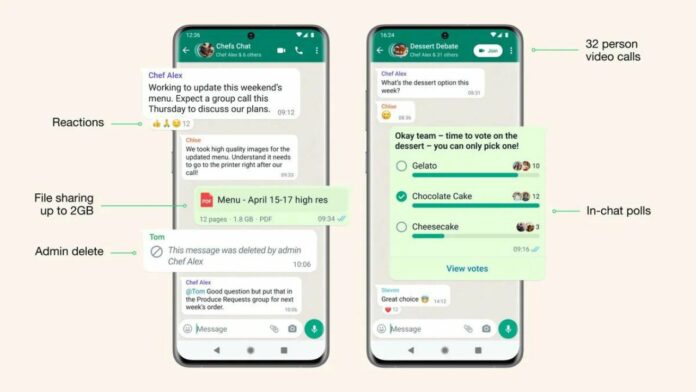 WhatsApp is now globally rolling out the WhatsApp Communities feature to organise various chat groups in larger structures, such as to help organisations, clubs, schools, and other private groups better communicate. Apart from this, it is also rolling out features such as a higher member count in group video calls and in-chat polls as well.

WhatsApp Communities feature in turn brings a bunch of features such as admin controls, support for sub-groups and announcement groups, 32-person voice and video calls, larger file sharing, emoji reactions, and polls as well. Under communities, there’s support for groups of up to 1024 users and with support for end-to-end encryption also.

Now, the company says that polls, 32-person video calls, and larger group sizes will also be supported on WhatsApp in a broader manner outside of Communities. Now, admins of existing group chats can transition their group to Communities and if they prefer, they can opt to re-create their group as a Community.

“Communities on WhatsApp will enable people to bring together separate groups under one umbrella with a structure that works for them”, says WhatsApp. In addition to providing new tools for admins, users can control their interactions within Communities. The existing settings allow users to decide who can add them to a group – and these settings will also apply to Communities.

Users will also be able to easily report abuse, block accounts, and leave Communities they no longer want to be a part of. WhatsApp is also adding the ability to silently leave a group, so everyone in a group is not notified in case people decide the conversation is no longer for them.

“The alternatives available today require trusting apps or software companies with a copy of their messages – and we think they deserve the higher level of security provided by end-to-end encryption,” Meta CEO Mark Zuckerberg said during an announcement.