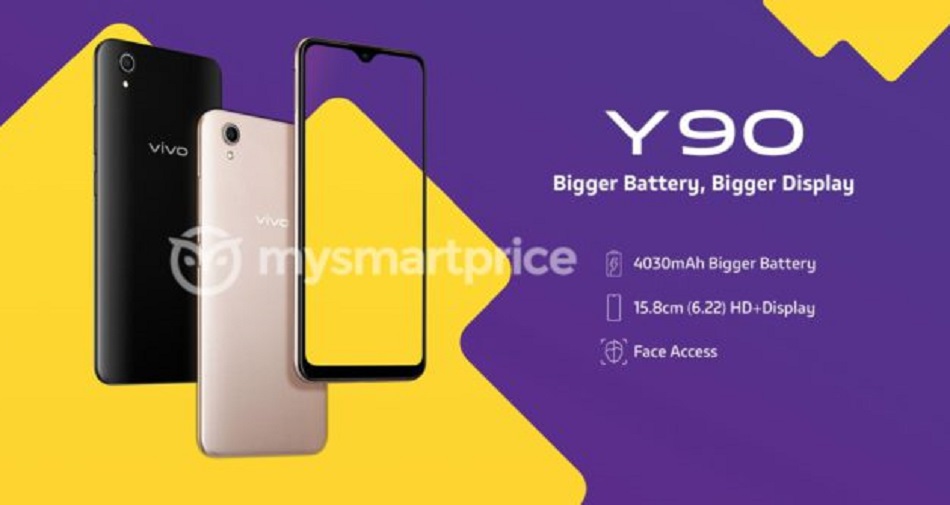 Recently press renders of the upcoming Vivo Y90 along with the key specifications surfaced online. Now a couple of hands-on-images of the Vivo phone have leaked online.

The leaked images, courtesy tipster MadSimar‏ @Hackersimar show the Vivo Y90 in two colour variants – Black and Gold. The front of the phone features a display with waterdrop notch while the back seems to be of polycarbonate body.

Apart from this, the back also only a single rear camera in the phone. Since the device is expected to be an entry-level smartphone, it does not feature any fingerprint scanner on the rear but it is said to come with face unlock feature.

As per earlier leaked specs, the Vivo Y90 will feature a 6.22-inch Halo FullView Display that will produce HD+ resolution. The smartphone will come armed with a 2GHz octa-core 12nm SoC and will run on FunTouch OS which is based on an Android 9 Pie.

The Vivo Y90 smartphone’s base variant with 2GB RAM + 16 GB storage is expected to arrive in India with a price tag of Rs 6,990 while the 3GB RAM + 32GB storage variant price is not known at the moment.