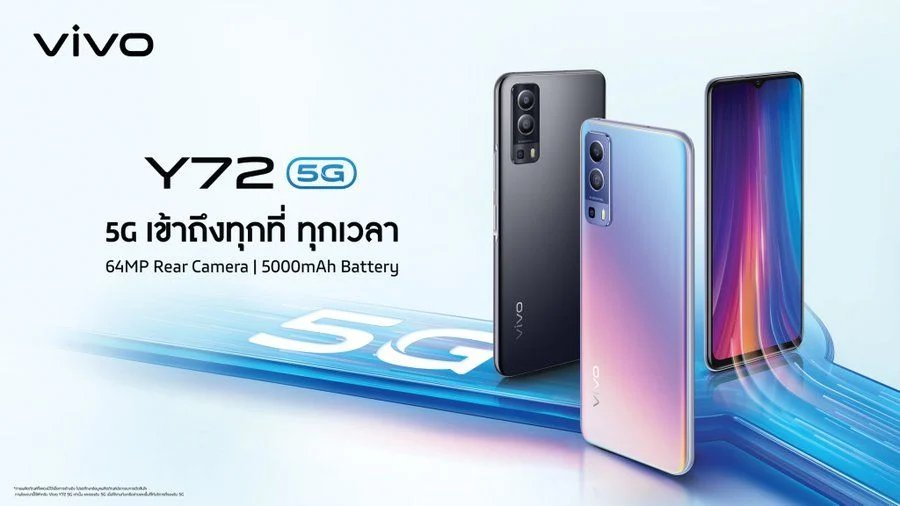 Vivo has announced that will be launching a new smartphone called the Vivo Y72 5G on March 22 in Thailand. Vivo Y72 5G will be the company’s first smartphone in the Y-series with 5G support.

The teaser poster shared by Vivo Thailand’s official Twitter account has revealed the camera and battery details of the device. As per the poster, Vivo Y72 5G will come with a triple-camera setup with a 64MP primary camera sensor with a waterdrop-style notch for the front camera. The phone will pack a massive 5000 mAh battery.

Vivo Y72 5G has also appeared at the Google Play Console which was first spotted by Pricebaba. The listing reveals its key specs.

The Google Play Console listing revealed that Vivo Y72 5G will come with a Full HD+ resolution of 1080 x 2408 pixels and a 440ppi pixel density. The screen size is not revealed in the listing.

The phone will come with a vertical camera module that houses a triple camera setup with a 64-megapixel primary camera. It will be equipped with a side-mounted fingerprint scanner.

Further, the listing tells us that it will be powered by the MediaTek MT6833V chip, which is the Dimensity 700 chipset. This will be paired with 8GB RAM and 128GB onboard storage. It will run Android 11 OS. Apart from this, the Play Console listing doesn’t reveal any additional information.

As per rumours, Vivo Y72 5G will feature a 6.58-inch LCD screen, The triple camera setup may include an 8-megapixel superwide lens and a 2-megapixel macro/depth sensor. There may be a 16-megapixel front-facing camera. It will be packed with 5,000mAh battery with 18W fast-charging support. For the colour options, there will be Black and Blue colours.