Vivo X70 renders have leaked online. The renders show the smartphone in a gradient design with a mix of blue and green colours. 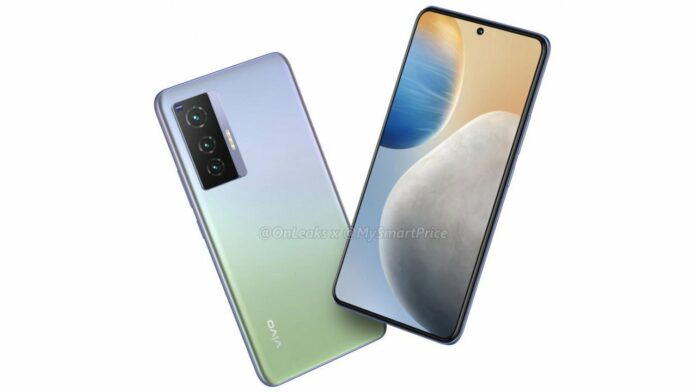 The Vivo X70 series flagships are being expected to launch in India next month. The series will likely include Vivo X70, X70 Pro, and X70 Pro Plus. Now Vivo X70 has surfaced online via some renders.

My SmartPrice, in collaboration with tipster Steve Hemmerstoffer (@OnLeaks), has shared the leaked renders of the Vivo X70 handset. It shows the smartphone from different angles.

As per the renders, the phone has a flat-screen with a punch-hole cutout in the top centre. In addition, it will come equipped with an in-display fingerprint scanner.

The phone’s back features a camera setup aligned vertically that houses a triple camera unit and a triple LED flash. A ZEISS branding can also be seen next to the topmost camera. As per rumours, the phone could be sporting an OIS-enabled 50-megapixel primary camera.

The right side features a volume controller and a power key. The left side is bare, while a SIM card tray, a microphone, a USB-C port, and a speaker grille are at the bottom. The leak states that the device measures 158.5 x 73.5 x 8mm, and its thickness increases to 10.6mm at the camera bump.

The renders show the smartphone in a gradient design with a mix of blue and green colours. But, we can expect Vivo to launch more colour options.

It is expected to come with a flat 6.5-inch display with a refresh rate of 120Hz. Further, the front camera is rumoured to be a 32MP sensor. It will pack a 4,200mAh battery with 33W fast charging support. The smartphone would be running FunTouch OS on top of Android 11.

As per an earlier Geekbench listing, the X70 smartphone will be powered by an octa-core processor clocked at 2.0GHz. However, the chipset name is written in the listing is MT6893Z. This means that MediaTek Dimensity 1200 processor will power the upcoming Vivo smartphone.

Moving on, the listing revealed that the phone runs on the Android 11 operating system. It will be likely come with Funtouch on top. The device is loaded with 12GB of RAM. However, there might be more RAM variants when it launches.