Earlier this month also Vivo V5 was reportedly went into flames while charging in Karnal, India

A smartphone is not the safest piece of hardware and given how handset manufacturers have recently crossed the limits in terms of design, one should always be careful with these compact computers. A recent incident which took place in Karnal, Haryana, saw Vivo’s V5 burn into flames while it was plugged in for charging. When the story broke on the internet, various users wished that this is the rarest of the rare cases.

However, things got a little more serious when another Vivo V5’s reportedly exploded while charging in one of the mobile stores in India. The photos of exploded phone have gone viral on the social media, showing the damaged phone from all angles. As of now, we have had no word from the company on this incident.

One of the major highlights of last year in the tech industry was Galaxy Note 7’s global recall. Couresty of all what happened with Note 7, people are not taking smartphone explosions for granted anymore. Several other smartphones from OnePlus and even Apple were accused of explosions later last year which was soon resolved and was likely restricted to that particular unit. However, the question still remains, Are smartphone manufacturers ignoring the design limits in order to make their device more thinner and, perhaps, more attractive.

Today, Vivois all set to launch another variant ofV5s in India today and this incident will definitely raise questions in the mind of interested customers. 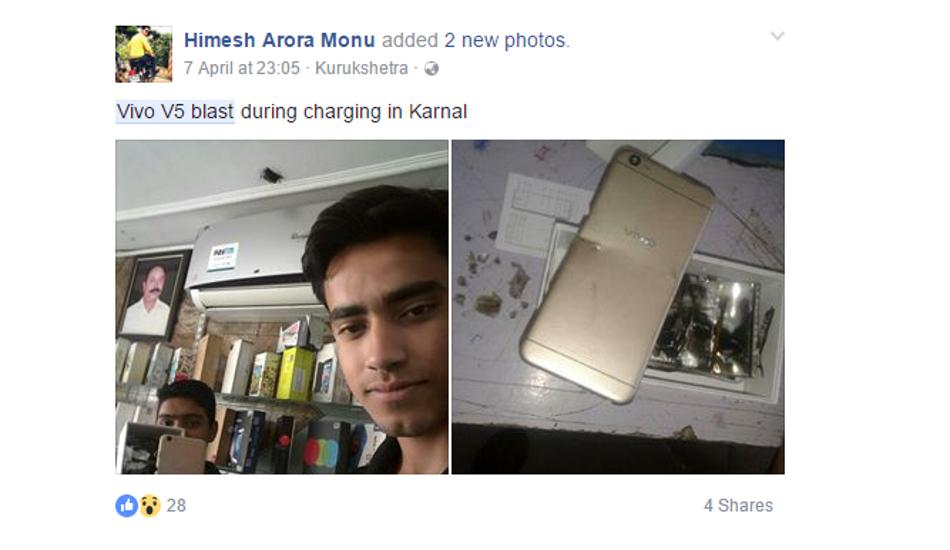 To recall, Vivo V5 smartphone was launched in India in November last year. The highlight of this smartphone is its 20-megapixel selfie camera, which is accompanied by a moonlight glow LED flash, Sony IMX376 sensor, f/2.0 aperture and 5p lens. On its back, it flaunts a 13-megapixel primary camera with LED flash and Phase Detection AutoFocus (PDAF).

The Vivo V5 smartphone has a metal unibody design and features a 5.5 inch Full HD (1920 x 1080 resolution) display with 2.5D Corning Gorilla Glass protection. It comes equipped with 1.5GHz octa-core MediaTek MT6750 processor with Mali T860 GPU. The V5 smartphone comes with 4GB RAM and 32GB internal storage, which can be further expandable up-to 128 GB via microSD card. It runs on Android 6.0 Marshmallow operating system wrapped under Funtouch OS 2.5 and gets its juices from a 3000 mAh battery. It also houses a water-resistant fingerprint sensor, which is embedded in its home button. The company claims that V5’s fingerprint sensor can unlock the phone in just 0.2 seconds.