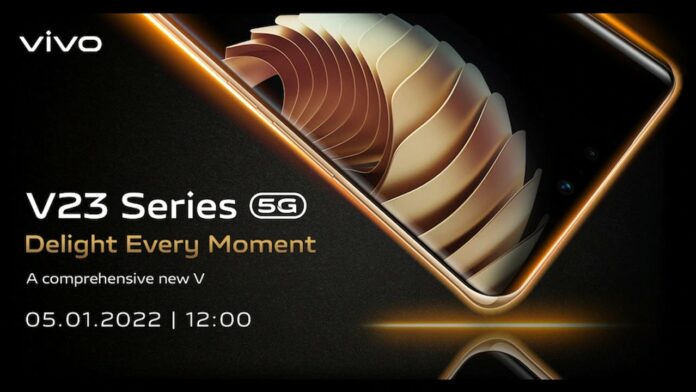 Vivo has confirmed to launch the Vivo V23 5G series smartphones – V23 and V23 Pro 5G, in India on January 5. The company has teased the upcoming launch via Twitter.

As per the tweet, the Vivo V23 5G series of smartphones will launch on January 5 at 12 pm IST (noon). In addition, a microsite for Vivo new series is now live on the company’s website and Flipkart. Both have teased the key specifications of the upcoming series.

The Vivo V23 will come with a flat-screen while the V23 Pro will feature a curved screen. Both will come equipped with a triple camera set up with 108-megapixel primary sensor. Additionally, the Vivo V23 Pro will have dual front cameras that include a 50MP main camera and an ultra-wide camera.

The smartphones will be powered by the MediaTek Dimensity 1200 5G SoC. The processor will be paired with 8GB of RAM and will feature 4GB of extended RAM.

The teaser also reveals that this will be India’s first colour changing smartphone that uses colour-changing glass. This will interact with sunlight to reflect a spectrum of colours. However, the colour changing capability is limited to the Sunshine Gold colour option for the Vivo series.

Moving on, the listing also revealed that the phone runs on the Android 12 operating system. The phone has received 679 points in the single-core test and 2707 points in the multi-core test. The device is loaded with 8GB of RAM. However, there might be more RAM variants when it launches.