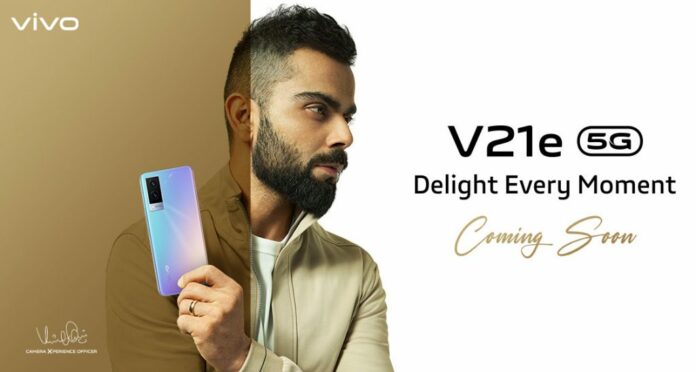 Vivo has today confirmed to launch the V21e 5G, the company’s new smartphone in the V21 series in India on June 24. The Vivo V21e 4G made its global debut a couple of months ago in Malaysia, but the 5G version is quite different from the 4G version.

As per the poster shared on the compan’ys official Twitter handle, cricketer Virat Kohli, who is a brand ambassador for Vivo is holding the light blue model of the phone.

Vivo V21e 5G will feature a 6.44-inch FHD+ AMOLED display with 600nits brightness. The phone will have an in-display fingerprint sensor. It will be powered by MediaTek Dimensity 700 processor paired with 8GB of RAM + 3GB virtual RAM, along with 128GB of storage.

In terms of optics, Vivo V21e 5G will reportedly be equipped with a dual rear camera setup comprising a 64-megapixel primary sensor and an 8-megapixel wide-angle lens at the back. For selfies, the phone will house a 32-megapixel front camera.

On the software front, the smartphone will run Android 11 with FunTouch OS layered on top. It will pack a 4,000mAh battery with 44W fast charging support.

Connectivity options of the Vivo V21e are likely to include dual-band Wi-Fi, Bluetooth 5.1, GPS, 5G, and a Type-C port.

The Vivo V21e 4G in Malaysia comes with a price tag of MYR 1,299 (approx. Rs. 23,000). It has a 6.44-inch AMOLED FHD+ display. The phone is powered by Snapdragon 720G coupled with 8 GB of RAM and 128 GB of storage. It packs a 4,000mAh battery with 33W rapid charging. It has a triple rear camera setup with a 64-megapixel primary sensor, an 8-megapixel ultra wide angle lens, and a 2-megapixel macro sensor. It also has a 44-megapixel front camera for selfies.