Here is our list of top five free Android racing games, which will give Android users a good idea about these games.

Racing games are a popular method of entertainment for most mobile users and the Android Market is also slowly picking up with numerous free racing games on the platform.

With the ever rising popularity of motor sports in the country, especially after the first F1 event in India last month, Indian mobile phone users have also turned their attention to this genre as well.

Here is our list of top five free Android racing games, which will give Android users a good idea where to start exploring racing games on their Android smartphones.

‘GT Racing: Motor Academy’ is a free racing game, created by Gameloft. This is a tight racing simulator which lets the users create an entire racing career, right from being a novice to the world champion racer &#151 all with great 3D graphics and intuitive interactive menus.

There are two ways to get through the game – pay attention to all the classes, get all the licences to build wealth or else spend real life money to get ahead in the game.

The game comes with extremely simple controls. Buttons are placed on the screen – on the right, there is one to control the accelerator and the one on the left for brake. Overall, the game is fun, looks good and has depth as well.

Drag Racing is an addictive racing game which reminds the users of ‘Need for Speed’ though it doesn’t have any driving like the later.

Users, though, have to keep an eye on the speedometer and are need to keep working with the gear button to keep the car go faster.

The gamers get all their points when they beat the opponents to the finish line. The rewards that follow allow the users to buy components for their car so it goes even faster. 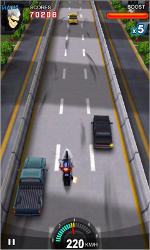 Users usually don’t expect their racing games to be thinking games, a slot they have reserved for games like chess, and they certainly don’t expect a game to stimulate the mind when it is action packed and fast. Racing Moto is a game which comes with a simple challenge &#151 users have to ride on a three lane road where they have to ride bikes to overtake other cars.

Users just have to press one button to get the much needed speed boost. When the cars in the other lane light up their indicators, they will change their lanes soon &#151 so they will get in your way. If the user stay longer on the wheels and they go faster, they get more points so to get the high score, stay driven.

In every game, users have to beat their last best score &#151 the main point which keeps the game very addictive.

Although Asphalt 5 HD is an Android racing game, the gameplay is slightly similar to the PlayStation game Buruout.

In this game, users get to operate exclusive super cars, which are upgradable with each win. The gamers are get to race in different continents and in towns such as Las Vegas, Rio, Paris etc.

The game has different kind of steering controls. The best part is, just like in cartoon films, even when someone is smashed in the game, they reappear.

The game comes in many modes, one involves drag racing, drift contests and timed racing. The smartphone users can also play alongside other players on the WiFi network, but they should be in the same network and should have installed the same Asphalt 5 HD.

The game looks stunning to say the least, and stands among the best among the Android racing games. 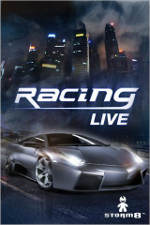 This game comes with a cool theme and look, though in navigation it is not that intuitive. Overall, it is a fun and addictive game which provides hours of fun gameplay to the users. The gamers start the game as novice and then they work their way up the levels of the game &#151 they end up as a pro racer at the end of the game.

Users have to share their code to invite others to join their crew. The gameplay grows tougher as users go into the advanced levels, and that’s why they need to resources well at higher levels. Of course, they need to make sure they have fuel, integrity and focus for the game. These resources get recharged as the users gain more experience into the game.