The Realme 8i and Realme 8s have arrived in India in the budget segment and here's a list of smartphones they are competitors with. 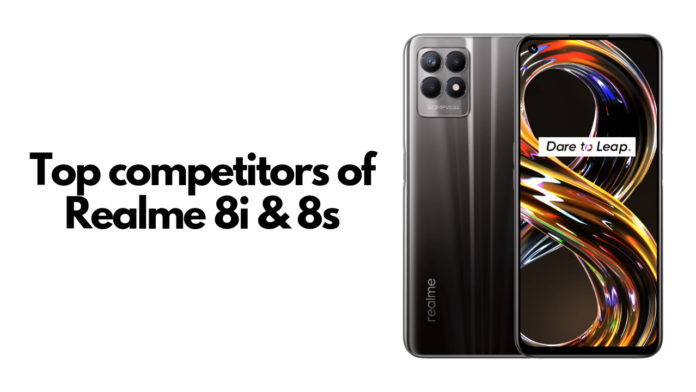 It is powered by a MediaTek Helio G88 processor and Mali G52 GPU. In addition, the processor is coupled with up to 6GB RAM and 128GB internal storage. There is also be a microSD card slot for more storage in the phone.

The Tecno Pova 2 is priced at Rs 10,999 for 4GB + 64GB model and Rs 12,999 for the 6GB + 128GB model. The phone comes in Dazzle black, Polar Silver and Energy Blue colours. Against the Realme 8i in India, it gets a bigger battery with an extra camera sensor. Also, the design of the Tecno Pova 2 looks more unique, in our opinion, compared to the Realme 8i.

It features a quad-camera set up in the rear camera. There is a 48 megapixels main camera with an F1.79 Aperture, a 2MP macro sensor, a 2MP depth sensor, and a 2MP AI camera unit. For the front, there is an 8 megapixels sensor.

Moving on, the phone runs on HiOS 7.6 based on Android 11. A 7000mAh battery backs it with 18W fast charging support. The company claims to offer up to 46 days of standby time, up to 31 hours of video playback time, up to 49 hours of calling time. Further, the huge battery gives up to 20 hours of web browsing and 233 hours of music playtime.

The Moto G60 is priced at Rs 17,999 for the 6GB RAM with 128GB storage version. It is one of the toughest competitors against the Realme 8s 5G. It comes with Stock Android, which is much easier to use and navigate through. There’s also a bigger battery and a better camera rear camera setup based on on-paper specs.

The Moto G60 features a 6.8-inch display with a 1080 × 2460 pixels resolution, 120Hz refresh rate and HDR10 support. It is powered by an octa-core Qualcomm Snapdragon 732G SoC with Adreno 618 GPU. In addition, there is expandable memory up to 1TB with microSD.

Moto G60 runs on Android 11, and it is backed up by a 6,000mAh battery with 20W TurboPower fast charging. In addition, it comes with support for Business-Grade Security with ThinkShield for Mobile.

The phone comes with up to 8GB of RAM and up to 256 GB of storage which is expandable up to 1TB. It runs on MIUI 12 based on Android 11. Furthermore, the phone packs a 5160mAh battery with support for 33W fast charging. The phone comes with a side-mounted fingerprint sensor, dual speakers and Hi-Res audio.