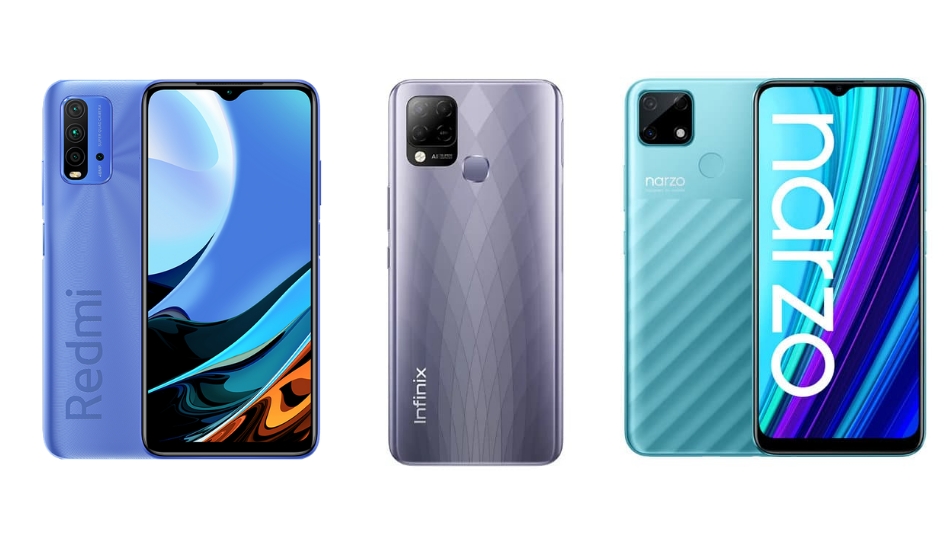 Here are the top 3 competitors to the budget offering by Tecno Mobiles in India, called the Tecno Spark 7 Pro

Tecno Mobiles has launched a new smartphone in India called the Tecno Spark 7 Pro which is the latest budget offering from the company. The phone comes in two storage options – 4GB + 64GB and 6GB + 64GB priced at Rs 9,999 and Rs 10,999 respectively.

Within this segment, you already get a lot of options from other brands including Motorola, Xiaomi, Infinix, and Realme. Let’s take a look at some of the competitors from other brands to see if the Tecno Spark 7 Pro is able to match up with them.

The Infinix Hot 10S has a triple-camera setup on the back with a 48MP primary lens with f/1.79 aperture, quad LED flash, a 2MP depth sensor, and an AI camera. On the front, there is an 8MP selfie camera with f/2.0 aperture, dual-LED flash.

This is exactly the same setup which we see on Tecno Spark 7 Pro meaning you should get similar image samples from both the phones. Next, The Infinix Hot 10S is backed by a 6000mAh battery. It runs XOS 7.6 based on Android 11. There is a rear-mounted fingerprint sensor as well.

The Infinix Hot 10S has a bigger battery as well which ultimately proves it to be a better pick as even the display size and the processor are better on the Hot 10S. And to top it all, the phone costs exactly the same as the Tecno Spark 7 Pro for the base variant.

Compared to the Tecno Spark 7 Pro, this display on Narzo 30A does lack 90Hz but still matches up to the Spark 7 Pro’s display in all other aspects.

Under the hood, the Narzo 30A is powered by an octa-core MediaTek Helio G85 chipset coupled with up to 4GB RAM and 64GB onboard storage which can be further expanded by a microSD card up to 256GB.

In comparison to the Tecno Spark 7 Pro, the Realme Narzo 30A is powered by a better chipset resulting in better performance. And the phone runs on Realme UI which is a bit closer to Stock Android providing an easy and smooth experience. The phone does have Android 10 compared to Android 11 on Tecno Spark 7 Pro but the phone is scheduled to get Realme UI 2.0 based on Android 11 in Q3 of 2021.

The camera experience will be better on the Tecno Spark 7 Pro as it has a triple rear camera array with a 48-megapixel primary camera, a depth sensor, and an AI lens. This should provide you with shots that are more rich in details.

The Redmi 9 Power is priced at Rs 10,499 for the 4GB + 64GB variant. But despite being an older device than the Tecno Spark 7 Pro, the phone stands up quite well against the latter. Redmi 9 Power features a 6.53-inch Full-HD+ display with a 2340 x 1080-pixels resolution, 400 nits brightness and Corning Gorilla Glass 3 protection.

Under the hood, the phone will be powered by the Snapdragon 662 processor paired with up to 4GB of RAM and 128GB of storage. There is expandable memory up to 512GB with microSD.

The Redmi 9 Power lacks a high refresh rate but doesn’t miss out on high resolution. It has a Full-HD+ display compared to a HD+ display on the Tecno Spark 7 Pro which means you will get a much sharper picture on the Redmi 9 Power resulting in a better viewing experience.

The phone draws power from a Snapdragon 662 chip which is almost equivalent to the MediaTek Helio G80 chip in terms of performance. Secondly, the expandable memory on the Redmi 9 Power is up to 512GB compared to just 256GB on Tecno Spark 7 Pro.

For the camera, the Redmi 9 Power is equipped with a triple camera system at the back consisting of a 48 megapixels primary shooter, 8 megapixels ultra-wide lens, as well as a 2 megapixels depth sensor. For the front, there is an 8-megapixel selfie camera inside a notch.

The setup on Redmi 9 Power is much more practical than the one seen on Tecno Spark 7 Pro. You get an 8-megapixel wide-angle lens instead of the AI lens found on the latter device. The wide-angle lens can click shots that capture a larger area because of a larger field of view. This means you get to capture more in a wide-angle shot compared to a traditional shot.

Redmi 9 Power packs a 6,000mAh battery with 18W fast charging. The phone comes with MIUI 12 out-of-the-box. It comes with a side-mounted fingerprint scanner.

Again, this smartphone has a bigger battery than the Tecno Spark 7 Pro and also has faster charging speed. The Redmi 9 Power will last you more compared to the Spark 7 Pro.