Tecno Spark 8 new variant with 3GB+32GB has today been launched in India. It comes in Atlantic Blue, Turquoise Cyan and Iris Purple colours. 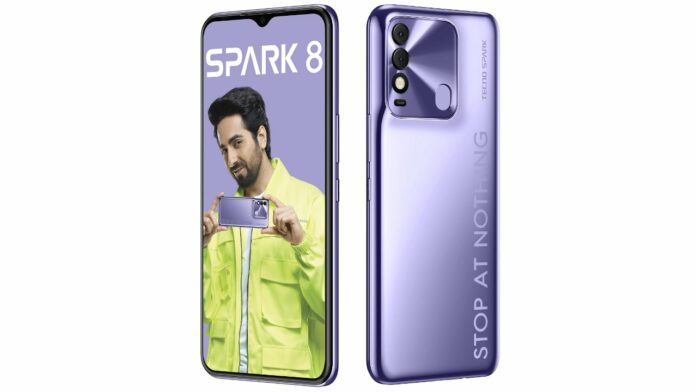 Tecno has launched a new variant of Tecno Spark 8 in India. The company has now introduced a new 3GB + 32GB model for Rs 9,299.

The phone was earlier launched in single storage of 2GB of RAM and 64GB. The new smartphone comes in three colours, including Atlantic Blue, Turquoise Cyan and Iris Purple.

The phone features a 6.5-inch HD+ display with 720×1600 pixels resolution. Further, the display comes with a 60Hz refresh rate and 20:9 aspect ratio. It packs the MediaTek Helio G25 SoC coupled with 3GB of RAM and 32GB of storage. The storage is expandable via a microSD card.

For photos and videos, the phone comes with a dual rear camera setup with quad-LED flash. It has a 16-megapixel primary sensor and a QVGA secondary camera. For selfies and video calls, the device uses an 8-megapixel shooter.

As for software, the handset runs Android 11 (Go edition) with HiOS 7.6. There’s also a 5,000mAh battery with support for standard 10W charging. In addition, it includes a rear fingerprint scanner for security. The phone also has face recognition as well.

It comes with an Indian Language Support feature to break all the language barriers. It allows you to interact with the loved one and express yourself in their local language.

Recently, Tecno Camon 18i was announced with MediaTek Helio G85 SoC and a 5,000mAh battery in Nigeria. The smartphone comes with 48-megapixel triple rear cameras. In addition, it has an Helio G-series chipset along with a 90Hz refresh rate on the front.