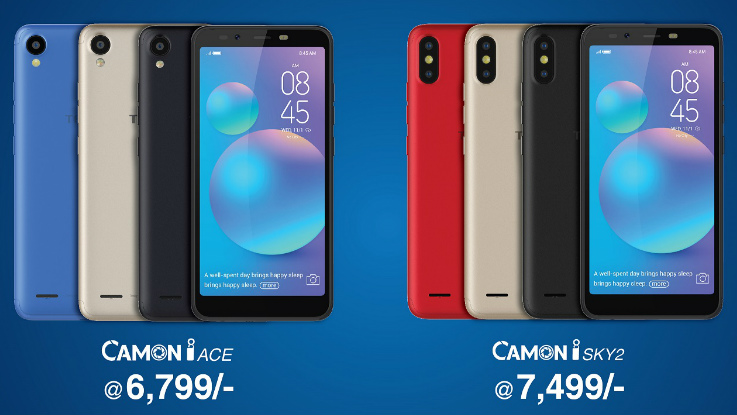 The major highlight of both the smartphones is the inclusion of FullView display and AI-infused rear and selfie cameras. Both of them features 5.5-inch HD+ display with an aspect ratio of 18:9. Both of them equips MediaTek MT6739WW quad-core processor clocked at 1.5GHz. They are backed by 2GB of RAM and 16GB of ROM.

Tecno Mobile, a sub-brand of Transsion Holdings, has today announced the launch of two new budget-centric smartphones in India. The company has announced Tecno Camon iAce and Camon iSky 2 at a price tag of Rs 6,799 and Rs 7,499 respectively. The Camon iAce is available through all major retail outlets in the country, while the Camon iSky 2 will go on sale starting from August 20.

Both the smartphones come loaded with Reliance Jio instant cashback offer of Rs 2,200. Under this offer, the users will get 44 cashback vouchers of Rs 50 each in MyJio account, which can be redeemed by the user on subsequent recharge of Rs 198 or Rs 299. Apart from this users opting for the latest smartphones will get 1-time screen replacement in one year, 100 days free replacements and 1-month extended warranty.

The major highlight of both the smartphones is the inclusion of FullView display and AI-infused rear and selfie cameras. Both of them features 5.5-inch HD+ display with an aspect ratio of 18:9. Both of them are powered by MediaTek MT6739WW quad-core processor clocked at 1.5GHz.

The Camon iAce and iSky 2 run on Android 8.1 Oreo with company’s custom user interface HiOS. The phones run on 3050mAh battery. The Camon iAce comes with the only face unlock feature, while the Camon iSky 2 is loaded with Face Unlock and fingerprint sensor. On the connectivity front, both the devices support 4G VoLTE, WiFi, Bluetooth, GPS, GLONASS, dual-SIM and micro USB port.