Tecno Camon 18i has been launched in Nigeria. The phone has a Helio G-series chipset along with a 90Hz refresh rate on the front. 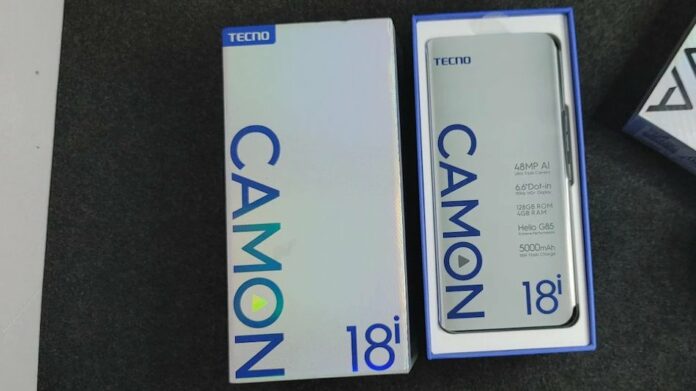 Tecno has launched a new smartphone called Tecno Camon 18i in Nigeria. The smartphone comes with 48-megapixel triple rear cameras. It has a Helio G-series chipset along with a 90Hz refresh rate on the front.

The Tecno Camon 18i will be available in three colours including Deep Sea, Frost Silver, and Tranquil Green. It is priced at NGN 84,500 (roughly Rs. 15,400) for the a single 4GB RAM + 128GB storage variant. As for the specifications of the phone, those are mentioned below.

Furthermore, the Camon 18i features a triple-camera setup at the back with a quad-LED flash unit. It features a 48-megapixel primary camera, QVGA secondary sensor and an AI camera. On the front, there’s a 16-megapixel sensor with an f/2.0 lens for selfies and video chats.

Connectivity options include dual SIM, 4G VoLTE, Wi-Fi 5, Bluetooth, GPS, NFC, Micro-USB, and a 3.5mm headphone jack. In addition, it is equipped with a rear-mounted fingerprint scanner for security. Furthermore, the phone runs on HiOS 7.6 based on Android 11 and is backed by a 5000mAh battery with 18W fast charging.

To recall, Tecno announced Camon 18 and 18P models last month. They come with 6.8-inch FHD+ displays with 1,080 x 2,460 px resolution. The former features a 90Hz refresh rate, while the latter comes with a 120Hz refresh rate.