All the three phones comes with Android KitKat OS and are priced between Rs 3,099 to Rs 4,399.

Spice Xlife 404 is a dual-SIM Android KitKat handset with 4-inch display that comes with 800 x 480 pixels resolution. The handset is powered by a 1GHz processor and 256MB RAM. The camera segment of the handset comprises of a 3.2 megapixel rear camera and 1.3 MP front snapper. The handset comes with a 1450 mAh battery that claims to offer 7 hours of talk time and 7 days of standby time. For connectivity, there is 2G/3G, Wi-Fi, Bluetooth, and USB. Other features include 512MB built-in and 32GB expandable storage, 3.5mm audio jack connectivity, A-GPS, Mali 400 GPU, multiple language support, and FM radio. 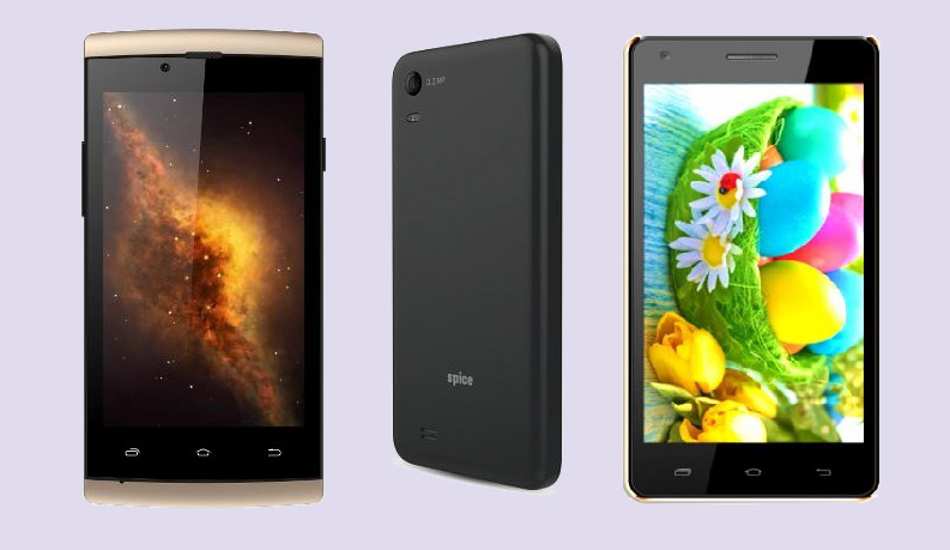 The Spice Xlife 431Q Lite too has dual-SIM as well as Android KitKat operating system. Its 4-inch display comes with the same 800x480 pixels resolution. The handset is powered by a 1.2GHz quad core processor and 512MB RAM. The Xlife 431Q Lite has a 3.2 megapixel rear camera and a 1.3 megapixel front camera. This smartphone has 4GB built-in storage capacity which can be expanded to 32GB via a microSD card. For connectivity, there is 2G/3G, Wi-Fi, Bluetooth, and USB. Other features include FM radio, AGPS, G-sensor, audio/video player, and 1750 mAh battery.

Spice Lite Xlife 512 is a dual-SIM Android KitKat device with 5 inch touchscreen display which offers 854x480 pixels resolution. It is powered by a 1GHz dual core processor and 512MB of RAM. The Spice Lite Xlife 512 is equipped with an 8 megapixel rear and 2 megapixel front camera. For connectivity, it has GPRS, EDGE, 3G, Wi-Fi, Bluetooth, and USB. Other features include A-GPS, 2000 mAh battery, music player, FM radio, 4GB built-in and 32GB expandable storage.

The XLife 431q is equipped with 1.2 GHz quad core processor and a 1750 mAh battery, 5.0 MP rear camera with dual LED flash and 1.3 MP rear camera. It comes bundled with 2 additional rear covers and a flip cover.

Spice Nexian with 1 GB RAM launched via Flipkart at Rs 3,799