Dubbed as H81XX and H82XX, the former seems to be a premium series with at least two smartphones, while the latter could be mid-range smartphones that will have four models.

Two new Sony smartphone series has been revealed through the user-agent profiles. Dubbed as H81XX and H82XX, the former seems to be a premium series with at least two smartphones, while the latter could be mid-range smartphones that will have four models.

Starting with the H81XX series, the user-agent profile reveals that two versions namely H8116 and H8166. The leak reveals that the smartphone will bear a 4K display with a screen resolution of 3840 x 2160 pixels. It will be backed by the latest Android Oreo operating system. Multiple reports suggest that the smartphone could be the successor of the Xperia XZ Premium and it would be the third phone from Sony to feature a 4K resolution display. 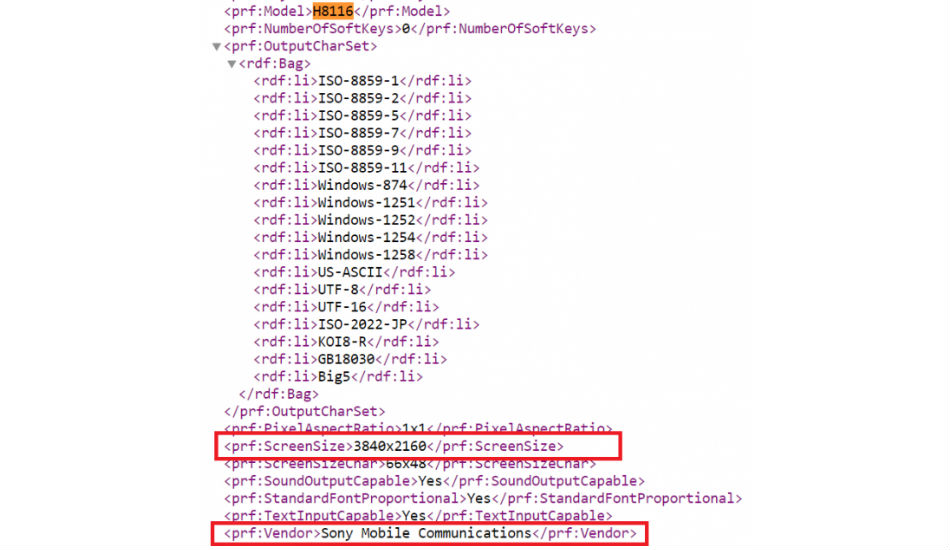 Moving on, the user-agent profile also reveals two models of the H82XX series including H8216, H8266, H8276 and H8296. The profile reveals that the smartphones will feature a Full HD display with a screen resolution of 1920 x 1080 pixels and it will run on Android Oreo as well. Interestingly, there is no information available on the above-mentioned models, so we suggest you stay tuned to us for further details.

Earlier, a new Sony phone bearing model number H8541 was surfaced online, which reveals that it will feature a bezel-less display, which is in line with other flagship devices. as per leaked spec sheet, the device will have a 5.7-inch 4K HDR display with Gorilla Glass 5 on top. Further, the smartphone is said to be powered by Qualcomm Snapdragon 835 processor, along with 4GB of RAM and 64GB of internal storage.

The leaked screenshot reveals that the Sony H8541 will be IP65/68 certified, so the device will be dust and water resistance. As far as connectivity features are concerned, the device will have Wi-Fi, Bluetooth 5.0, NFC, GPS + GLONASS and USB Type-C. The Sony H8541 measures 149 x 74 x 7.5mm, which is smaller and thinner than the Xperia XZ Premium which measures at 156 x 77 x 7.9mm.

Further, the Sony H8541 will reportedly run on Android 8.0 Oreo operating system and will be backed up by 3,420mAh battery with Qualcomm’s Quick Charge 3.0 technology for fast charging. Sadly, no details about the camera resolution have been leaked in the screenshot.