Two new rugged devices by Samsung are on their way! 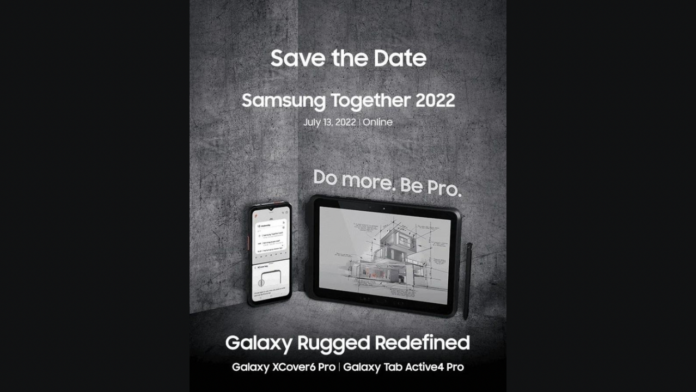 Samsung has scheduled a new launch event for July 13 on which the Korean brand is all set to debut two new rugged devices, including Galaxy XCover 6 Pro and the Tab Active 4 Pro. The launch will take place for global markets on the mentioned date. Both the devices will have a rugged form factor for extensive use cases.

Samsung announced that the July 13, 2022 event will be a virtual one where it will unveil the Galaxy XCover 6 Pro rugged smartphone alongside the Tab Active 4 Pro tablet. The devices shown in the launch poster give us a sneak peek at the upcoming devices where the tablet can be seen having thick bezels. Next to it is a stylus which could mean that the tablet will have support for it.

As for the smartphone, both the design as well as the specifications have been leaked in the past and they are as follows.

The Galaxy XCover 6 Pro is supposed to be made of hard plastic with a textured rear panel for better durability and grip. It will be a 5G-ready rugged smartphone that should sport a 6.6-inch TFT display with an FHD+ resolution and a 60Hz refresh rate. It will have a water-drop notch on the front that will reportedly house a 13-megapixel selfie camera. The smartphone could be powered by the Snapdragon 778G chipset.

It will be paired with 6 GB of RAM and 128 GB of storage. The device will run on Android 12 OS with One UI 4.1 on top. At the back, you should be getting a dual-camera system including a 50-megapixel main camera, and an 8-megapixel or a 12-megapixel ultra-wide lens. The smartphone will be backed by a 4050mAh battery, per the leaks.