Two mysterious Samsung smartphones bearing model number SM-G9650 and SM-G9600 has been spotted on benchmarking website, Geekbench. Both the models come loaded with some interesting specs sheet and are touted to be company’s next flagship models.
Starting with SM-G9650, the smartphone scored 1819 in single-core test and 4494 in multi-core test. It runs on Android 7.1.2, which is currently present in Pixel and Pixel XL and runs on a quad-core Qualcomm processor clocked at 1.78GHz. Interestingly, the name of the motherboard is said to sdm845, which could mean Qualcomm Snapdragon 845 chipset. Other than this, the phone will be backed by a 4GB of RAM. 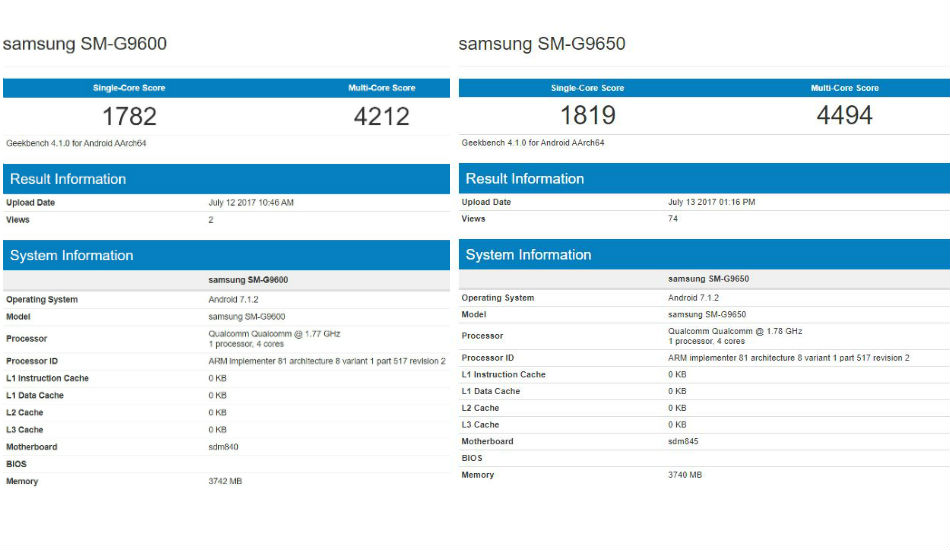 Moving on to SM-G9600, the model scored 1782 in single-core test and 4212 in multi-core test. Just like the above model, this one will also run on Android 7.1.2 and will be powered by a quad-core Qualcomm processor clocked at 1.77GHz. However, the phone comes with Qualcomm Snapdragon 840 chipset and will be backed by a 4GB of RAM.
You might also like this:
This is where it gets a bit confusing. Multiple reports suggest that the SM-G9600 will be a ‘lite’ version of the Samsung Galaxy S8+, however, the quad-core CPU with 1.77GHz resemble closely to Snapdragon 660 series. On the other side, both the models are touted to be the lite versions of the recently-launched Samsung Galaxy S8 and Galaxy S8+. Meanwhile, some report also mentions that SM-G9650 could possibly be the next flagship device, the Samsung Galaxy S9. However, we suggest you take this report with a pinch of salt and wait for some concrete information.
Note: The lead image is for representational purpose only