A new leak suggests the Galaxy Z Fold 3 pre-order bundle will come with a Note Pack and a 25W wall brick. An S-Pen will be included as well. 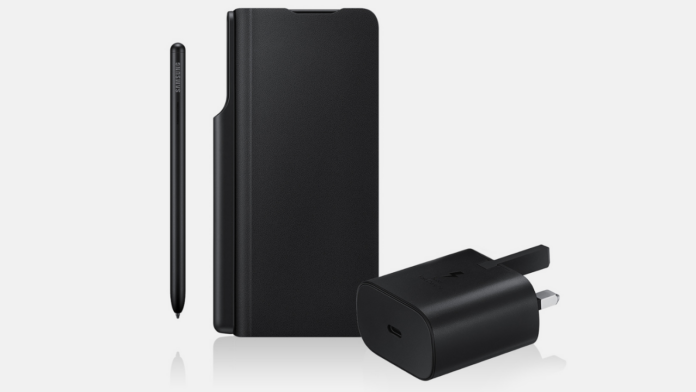 Offline retailers in India recently started accepting pre-orders for the Samsung Galaxy Z Fold 3. A new leak has emerged which suggests the Galaxy Z Fold 3 pre-order bundle will include a Note Pack and a charger as well.

The leak comes from @_snoopytech_ on Twitter. As per the tipster, the Note Pack will consist of an S-Pen flip cover. The flip cover will come with the S-Pen included. The cover also has a housing slot where the Stylus will sit when not in use.

Furthermore, there will be a charger included in the Galaxy Z Fold 3 pre-order bundle as well. This will likely be a 25W wall brick. This may have confirmed that the Galaxy Z Fold 3 will not be arriving with a charger. There’s no official confirmation from Samsung regarding this pre-order bundle so the information should be taken with a pinch of salt.

The Galaxy Z Fold 3 Specifications were leaked in detail recently. It should sport a 7.6-inch Dynamic AMOLED primary display with 2208 x 1768 pixels resolution and Corning Gorilla Glass Victus protection. In addition, there will be a 374ppi pixel density and 120Hz refresh rate. The display on the outside will be a 6.2-inch Super AMOLED panel. It will have 2260 x 832 pixels resolution, 387ppi pixel density, and a 120Hz refresh rate.

The phone should pack a 4400mAh battery cell with support for fast charging and wireless charging. In addition, a Snapdragon 888 chip will be seen powering the smartphone along with up to 12GB of LPDDR5 RAM and up to 512GB of UFS 3.1 storage.