Samsung is working on a Mini version of Galaxy S9 smartphone.

Samsung recently announced the launch of its latest flagship smartphones, the Galaxy S9 and Galaxy S9+ in India. Now seems like the company is working on a Mini version of Galaxy S9 as a smartphone with model number SM-G8750 has been spotted on a GeekBench benchmarking website. The smartphone is said to be the Samsung Galaxy S9 Mini. The listing has revealed some of the expected specifications of the upcoming smartphone.

In the GeekBench listing which was first spotted by Nashville Chatter, the Galaxy S9 Mini got 1619 points in single-core test and in multi-core test it received 5955 points. As per the listing on Geekbench, the Galaxy S9 Mini has 4GB RAM and Qualcomm Snapdragon 660 1.84 GHz octa-core processor. The handset is based on the Android 8.0.0 Oreo operating system. 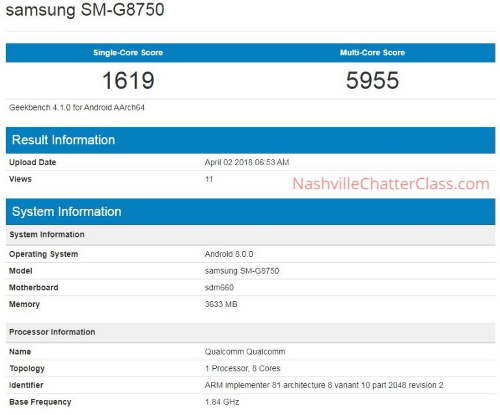 Meanwhile, Samsung has yesterday announced a price cut on its last year’s flagship smartphones, the Galaxy S8 and Galaxy S8+ in India. To recall, the smartphones were launched in India in April last year.