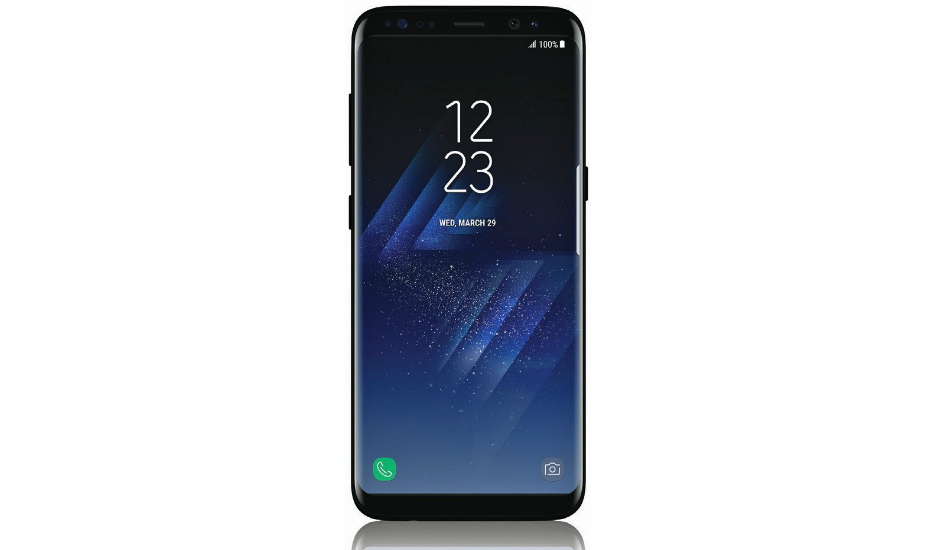 The press renders, which has been leaked by a renowned tipster Evan Blass, shows the front panel of the Galaxy S8.

Samsung finally confirmed at its Mobile World Congress event that it will be launching this year’s flagship devices, the Galaxy S8 and Galaxy S8+, on March 29th and as we are heading towards the launch date, rumours mills are working 24×7 to provide the latest insight of the upcoming devices. If the latest ones are believed to be true then we have a new press render of the Samsung Galaxy S8.

The press renders, which has been leaked by a renowned tipster Evan Blass, shows the front panel of the Galaxy S8. The device looks similar to what we have seen in the past. The smartphone shown in the latest renders has a big screen size, which means that the company will opt for an unusual aspect ratio of 18:9 (2:1), which we recently saw in the LG G6. However, the only major difference one could make out is the fact that LG G6 has a flat display, while the Samsung Galaxy S8 will come with dual curved edges. Further, there are no navigation buttons present, which indicates that there will on-screen controls that can be customised as per one’s need.

Samsung will be holding an Unpacked 2017 event which is scheduled to take place in New York on March 29, 2017 (11:00 AM EDT – 10:30 PM IST), where it will launch the upcoming devices. Both the smartphones have been subjected to numerous leaks in the past including a recent specs sheet, which gives us ample amount of details. According to some recent leak, the Galaxy S8 and Galaxy S8+ will come with a 5.8-inch and 6.2-inch QHD+ Super AMOLED display respectively. Other than this, you get a 4GB of RAM, 64GB internal storage which is expandable, 12-megapixel rear camera with dual pixel technology, 5-megapixel front-facing camera, an iris scanner, IP68 dust and water resistant, Samsung Pay, wireless charging, and earphones tuned by AKG.