The smartphone was initially launched in India last year for Rs 56,900.

The Samsung Galaxy S7 Edge smartphone is now available for Rs 48,599 on Amazon India. The smartphone was initially launched in India last year for Rs 56,900. Later in the year, Blue Coral and Pink Gold Colour variants were announced for Rs 50,990. The other colour options are Black Onyx, Gold Platinum, Silver Titanium and Pink Gold. Currently, only Gold Platinum is available at discounted price while other variants are still available for Rs 50,900. 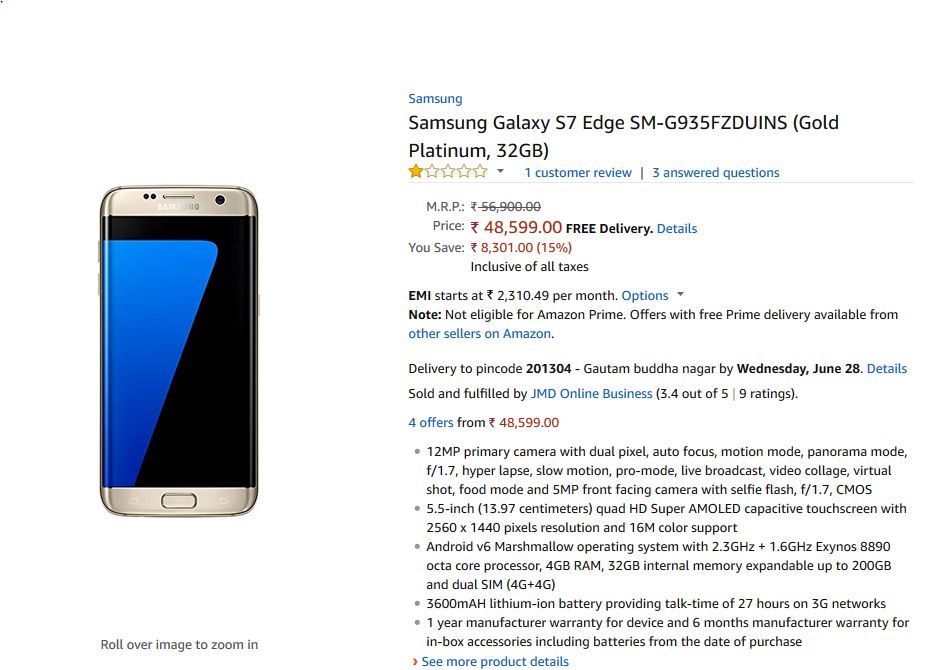 Recalling the specifications, the Galaxy S7 Edge has a 5.5-inch Quad HD Super AMOLED curved display. Underneath the hood, we get an Octa-Core 2.3 GHz Exynos 8890 chipset paired with 4GB RAM and 128GB Internal storage which is further expandable up to 256 GB via microSD card. Moreover, as the name suggests, the S7 Edge boasts an edge display, like the S6 Edge and is water and dust resistant boasting IP68 certification. Though the smartphone runs on Android 6.0 Marshmallow, Samsung is already testing Android Nougat on the device via Galaxy Beta Program.

For the camera, the device sports a 12-megapixel camera with F1.7 aperture. Besides, the rear camera of S7 Edge is armed with phase detection autofocus (PDAF) technology, motion panorama, motion photo, and hyper lapse features. Up front, It has a 5-megapixel front camera that comes with wide selfie mode.