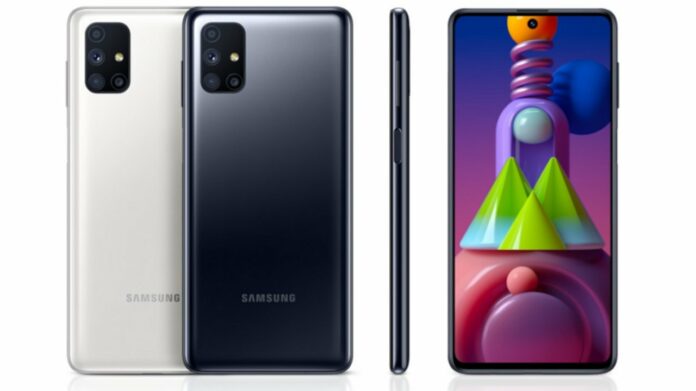 Samsung is gearing up to launch a new smartphone under its M-series. Dubbed as Samsung Galaxy M52 5G, the handset has been spotted at BIS.

The upcoming Samsung Galaxy M52 5G has been certified by BIS (Bureau of Indian Standards) with model number SM-M526B/DS. The listing suggests that the phone will soon be launched in India.

Sadly, the listing does not reveal any key information on the upcoming device. It just hints at an imminent launch in the country. We expect it to become available in the coming weeks. The listing was first spotted by tipster Mukul Sharma of Stufflistings.

Samsung Galaxy M52 5G the successor of the Galaxy M51 launched in India last year. The device is supposed to be a rebrand of the Galaxy F52 5G. It is said to be powered by a Qualcomm Snapdragon 778G SoC with up to 8GB of RAM and 128GB of internal storage.

Further, the device will reportedly feature a 32MP selfie camera. Whereas, on the back, it might feature a 64MP quad-camera setup. It is said to come in three colours in Europe, namely black, white, and blue.

Samsung Galaxy M51 features a 6.67-inch Super AMOLED Plus Infinity O Display with a resolution of 1080 x 2340 pixels. The phone has a 7000mAh battery which also comes support for 25W fast charging.

Under the hood, the Galaxy M51 is powered by 2.2GHz octa-core Snapdragon 730G SoC with Adreno 618 GPU. The phone comes with up to 8GB and 128GB storage which is further expandable by up to 512GB via a microSD card.