Samsung’s upcoming mid-range smartphone, the Galaxy M30, has once leaked online revealing some key details about its design and specs. The leak comes in the form of phone’s schematics revealing all the information ahead of its official launch.

The leak was obtained by PriceKart and it reveals that the Samsung Galaxy M30 will follow a similar design language as we have seen in Galaxy M20 and Galaxy M10. The phone will feature a glossy finish at the back and one can also see new Infinity V display, which is also present on the two other devices.

However, the major difference here is the inclusion of three cameras at the back panel. This could be something new as there are not many devices available in the mid-range segment that comes loaded with a triple-camera setup. 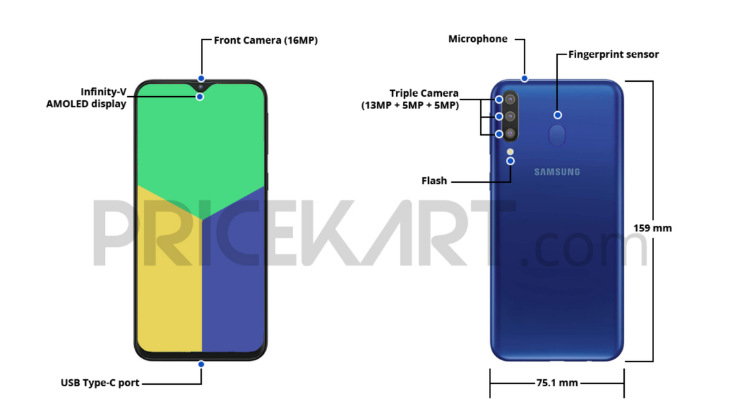 Coming to the specifications, the report highlight that the smartphone will feature a 6.38-inch Full HD+ Infinity V Display with a screen resolution of 2210 x 1080 pixels. The Galaxy M30 will be powered by the same Exynos 7904 processor, which is present in the Galaxy M20. The phone will be available in 6GB of RAM and 128GB of internal storage. The memory can be further expanded via microSD card slot.

The Samsung Galaxy M30 will be powered by a 5000mAh battery and it could run on Samsung Experience 9.5 UX. Connectivity options include USB Type-C port, Bluetooth, 4G VoLTE, dual-SIM, GPS, GLONASS and more. The phone measures 159 x 75.1 x 8.4mm and weighs 175 grams

Samsung Galaxy A9 (2018) receives yet another price cut in India