Samsung has rolled out the latest Android Nougat 7.0 update for its Samsung Galaxy A3 (2016) smartphone. Samsung launched the Galaxy A3 (2016) smartphone last year with Android 5.1 Lollipop operating system. The Nougat update comes with the newer version A310FXXU3CQE6. The smartphone has already been spotted with Android Nougat operating system on GFXBench and GeekBench benchmarking websites earlier and the device even received Wifi certification with Nougat.

As reported by StechGuide, the latest Android Nougat update for Galaxy A3 2016 is available in Germany. 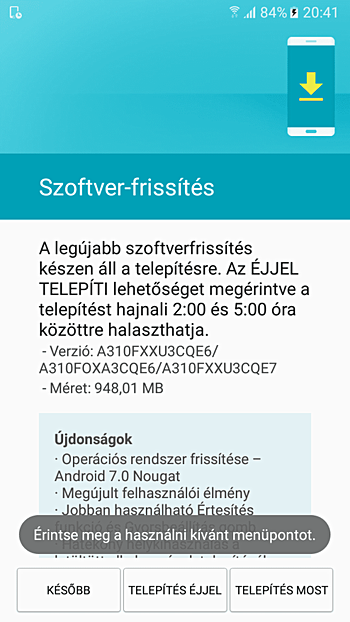 The update is around 1GB in size and since the update is being rolled out over-the-air, it may take some time before it comes to your device. One can also manually check for the update by going to Settings ->About Phone -> Software Update. For the update, your phone should be at least 50% charged and connected to a Wi-Fi network.

As far as specs are concerned, the Samsung Galaxy A3 (2016) comes with a 4.7 inch HD Super AMOLED display and runs on a 1.5 GHz quad-core processor coupled with 1.5 GB RAM and 16 GB of internal memory, which can be further expanded up to 128 GB via micro SD card slot. The smartphone comes with a 2300 mAh battery, Android Lollipop operating system, 4G, WiFi (a/b/g/n), Bluetooth 4.1, micro USB 2.0 port and a host of other sensors. The Samsung Galaxy A3 (2016) also offers a 13-megapixel rear camera and a 5-megapixel front camera.