Clash of compact powerhouses: Redmi 5 vs iTel A44 Pro 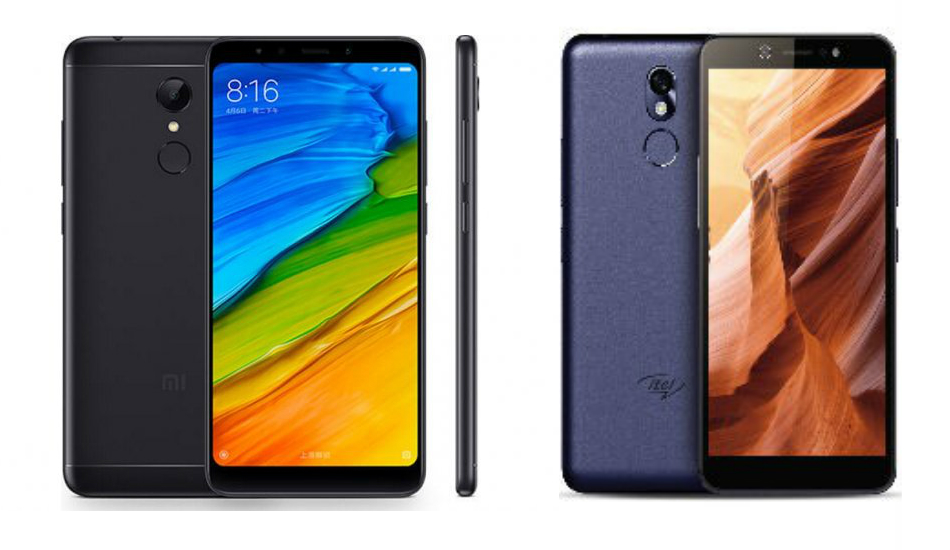 Both phones feature 2GB of RAM with little to differentiate between them.

Earlier this week, iTel announced the addition of the A44 Pro alongside the original A44 and S42, all three of which stood in the entry-level catalog of the budding Chinese smartphone manufacturer. With all screens having 18:9 displays and rear fingerprint scanners on a budget, the trio of devices are expected to give a tough competition to other entry-level smartphones in the market, one of them being the latest addition to the Xiaomi brand, the Redmi 5.

The Redmi 5 was announced last week and it has been a day since the device went online on Amazon India. The entry variant to the Redmi 5 comes at a price tag of under Rs 8,000 with 2GB RAM which is also what the iTel A44 Pro boasts of. We’ve thus sorted out a quick comparison between the iTel A44 Pro and Xiaomi Redmi 5.

Having already made a decisive move to the now popular 18:9 aspect ratio screen, Xiaomi has managed to bring an all-screen device of decent caliber on a budget price range with the Redmi 5. The device features a 5.7-inch 720p display with a pixel density of close to 282 PPI.

The A44 Pro, on the other hand, comes with a smaller 5.45-inch touchscreen display with a resolution of 1440×720 pixels which makes the aspect ratio of both the devices similar. But with a smaller form factor featuring an 18:9 display, the iTel A44 Pro will be a better option.

The Redmi 5 is powered by a moderately powerful octa-core Qualcomm Snapdragon 450 processor which is rated at 1.8GHz. The Xiaomi device packs 2 gigs of RAM and 16GB of onboard storage which can be expanded to the user’s liking. For connectivity, the Redmi 5 offers 4G VoLTE, Bluetooth v4.2, WiFi, GPS and a micro USB port for data and charging.

Meanwhile, the iTel A44 Pro is powered by an unknown quad-core processor coupled with 2GB of RAM and 16GB of internal storage, just like that of the Xiaomi device. It falls short by a little margin due to the additional CPU cores on the Redmi 5. In terms of connectivity, the A44 Pro shares the same capabilities as of the Redmi 5 with extra support for Band 40 LTE which is used by some networks in India. However, the iTel device only makes use of the older Bluetooth v4.0.

Coming to the imaging aspects, both phones pack a different combination of lenses for the front and rear ends. While the iTel flaunts an 8MP shooter on the front, the Redmi 5 only has 5MP snapper for selfies and video calling. Despite that, the Xiaomi Redmi 5 steals the show with its 12-megapixel sensor with 1.25-micron pixel size that allows more light to be absorbed by the sensor in low light conditions. Furthermore, the Redmi 5’s PDAF sensor will simply be faster than the iTel device in terms of focusing on a given subject.

Though both smartphones run on the not-so-latest Android Nougat, the Redmi 5 makes use of the slightly polished Android 7.1.2 with Xiaomi’s MIUI 9 on top providing a slew of additional features and a user-friendly interface. Meanwhile, the iTel A44 Pro runs on the older Android 7.0 Nougat which doesn’t look like a desirable alternative as far as firmware is concerned.

The iTel A44 Pro is powered by a mere 2,400mAh battery while the Redmi 5 gets juiced up by a larger 3,300mAh battery which is a bare minimum considering the usage of phones lately.

With many smartphone manufacturers opting toward all-screen displays, iTel and Xiaomi have done an unthinkable job at bringing down the price of “infinity” screen devices. While the price point of A44 Pro hasn’t been revealed yet, we expect it to be in the middle of the A44 (Rs 5,499) and iTel S42 (Rs 8,799), much lower than the entry variant of the Redmi 5 which is now available for Rs 7,999.

While the Xioami device seems a little more powerful for daily usage than its iTel counterpart, the A44 Pro’s cheaper price could play some part in convincing the customers. Another thing that needs to be considered is that iTel’s A44 Pro would be made available across the country in offline stores and Redmi 5 could only be bought from Amazon, yet. And we all know how hard it is to get a grab of a Xiaomi device online which could also be a factor in letting users choose the right budget handset.