Realme 9 Pro+ India launch seems to be right around the corner and the specs and renders for the smartphone have been leaked. 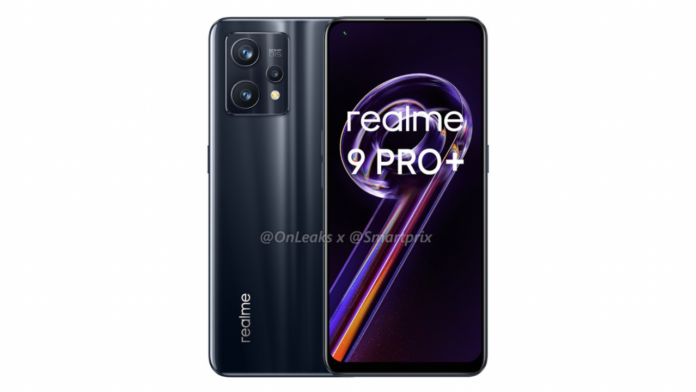 Realme 9 series was confirmed to arrive in India soon and now the brand has teased the Pro+ model in the series, further confirming that the device will soon be launching in the country. Moreover, the renders for the smartphone have leaked along with its full specifications that leaves very little to know about the device once it launches.

Realme India Twitter account tweeted about the model in the 9 series. It states that it will be the first Pro+ model in the Realme number series smartphones. Furthermore, the design and specs of the Realme 9 Pro+ were leaked by SmartPrix in collaboration with OnLeaks that gave us the first look at the device.

The renders show us the device from front and back and confirm it will have a triple camera setup. This setup will be headlined by a 50-megapixel camera that will also have support for Optical Image Stabilisation. Furthermore, the leak says that it will sport an AMOLED display on the front with narrow bezels. There’s a punch hole at the top left corner housing a selfie camera. The phone will have an in-display fingerprint sensor.

On the right resides the power button whereas on the left we have the volume rocker. The smartphone can be seen in a Mid-Night Black colour variant in the render. Apart from that, it will also be available in Aurora Green and Sunrise Blue colours. The publications says that both the Realme 9 Pro and Realme 9 Pro+ will be the same in design. There will be some minor differences in the size and weight of the smartphones though.

The smartphone will sport a 6.43-inch FHD+ sAMOLED display with a 90Hz refresh rate. It will be powered by the MediaTek Dimensity 920 5G SoC and will come with up to 8GB RAM and up to 256GB internal storage.

The rear camera setup will have a triple camera setup that will consist of 50MP+8MP+2MP shooters, while on the front, there will be a 16MP selfie camera. The leak points out that the 50MP sensor is a customized Sony sensor. Lastly, the Pro+ model will pack a 4500mAh battery with fast charging support.