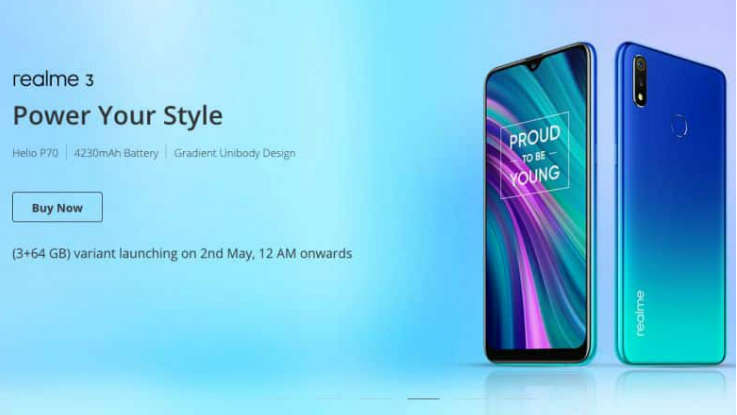 The company has teased the new variant with 3GB RAM and 64GB of internal storage on its official website.

The Realme 3 comes with a price tag of Rs 8,999 for 3GB RAM and 32GB internal storage, while the 4GB RAM + 64GB storage option is priced at Rs 10,999. Our best guess is that the company will price the 3GB RAM with 64GB storage at Rs 9,999. The new variant will be available in Dynamic Black, Radient Blue and Black colour options.

Jumping straight to the specifications, the Realme 3 features a 6.2-inch HD+ display with a screen resolution of 1520 x 720 pixels, 19:9 aspect ratio, 450nits brightness and Corning Gorilla Glass protection. The phone is powered by a MediaTek Helio P70 2.1GHz octa-core processor along with Mali G72 GPU.

For the camera, the device is equipped with a dual-camera setup with a combination of 13-megapixel primary sensor with an f/1.8 aperture and a 2-megapixel secondary sensor, coupled with an LED flash. For the front, there is a 13-megapixel sensor with f/2.0 aperture, 1.12-micron pixels.

Realme 3 is backed by a 4230mAh battery and it runs on Android 9.0 Pie, which is based on ColorOS 6.0. On the connectivity front, the phone supports Bluetooth 4.2, 4G LTE, GPS, Wifi, GLONASS, micro USB port and 3.5mm audio jack.