Poco seems to be gearing up to launch the Poco M4 Pro in India. Meanwhile, Poco X4 5G has also been spotted on Geekbench. 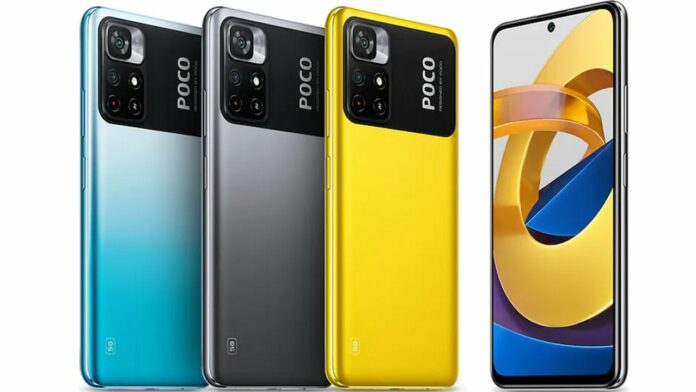 Update 8/2/2022 – Poco has officially announced that the Poco M4 Pro 5G will now be unveiled in India on 15th February, 2022. Moreover, it has also revealed the design of the smartphone in blue, black and yellow colours via its Twitter handle.

Poco, after being silent for months in India, has started teasing a new smartphone that is supposed to be the Poco M4 Pro. The device has already debuted in select markets in Europe back in November of 2020 and the company is getting ready to launch the same in the Indian market as well.

Poco’s Twitter handle has been posting short video teasers where it is teasing some key features of the Poco M4 Pro. Till now, it has posted videos about the processor, display and cameras on the Poco M4 Pro. Further, while we don’t have a concrete date for the launch of the Poco M4 Pro in India, it seems imminent and we can soon expect an announcement.

Apart from this, the European variant of the Poco M4 Pro sports a 6.6-inch full-HD LCD display with a 90Hz refresh rate and a 240Hz touch sampling rate. The display also comes with DCI-P3 wide colour gamut. Further, it is powered by the MediaTek Dimensity 810 SoC with up to 6GB of RAM and 128GB of internal storage. In addition, it supports a microSD card of up to 1TB.

The Indian variant has scored 668 points in the single-core and 2052 points in the multi-core test. The listing reveals that it is powered by the Snapdragon 695 chipset and comes with 6 GB of RAM. The device comes preinstalled with Android 11. Reports suggest that the Poco X4 5G could be a rebadged version of the Redmi Note 11 Pro 5G, but with a unique back panel design.