Paytm launches Inbox: May not be able to take on WhatsApp 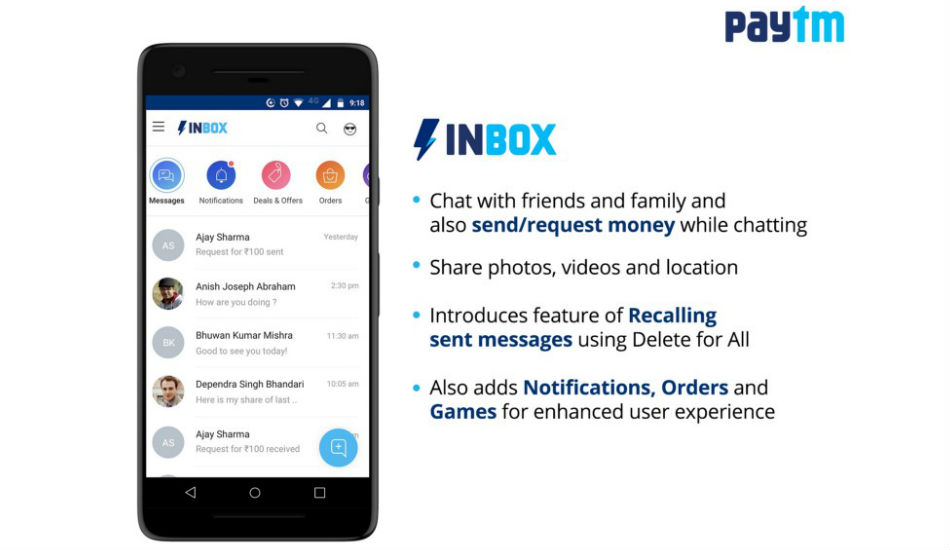 The update is available on Android and it will be coming soon on the iOS platform as well.

Paytm has announced the launch of its latest in-app messaging feature known as Inbox. The feature is a full-fledged messaging platform that allows users to chat with friends and one can also send and receive money. The update is available on Android and it will be coming soon on the iOS platform as well.

To start with some key features, Inbox is similar to WhatsApp and comes allows users to send photos and videos, share live location and one can click photos and send it their friends through the built-in camera app. Just like WhatsApp, the messaging platform comes with end-to-end encryption and one can also create groups for chatting.

Then there are Notifications, where one can see cashback offers available across categories and in Orders section, one can view their order and transaction updates. Paytm Inbox also comes loaded with Games including Cricket and trivia-based games.

Paytm Inbox also features an option to recall a message, which is similar to what we have seen in WhatsApp ‘Delete for Everyone’ feature. Users can delete messages from an individual chat or a group and unlike WhatsApp, users can delete the message without any time limit. Lastly, users will be able to receive and send money through the app as well. “This will make payments easier, as everyone from individuals to local retail stores to home-based entrepreneurs can now interact and initiate payments on-the-go,” the company said in a blog post.

The move is clearly meant to counter WhatsApp upcoming payment feature. For your reference, the Facebook-owned messaging app is in final stages of testing the WhatsApp Pay feature and it might announce it in December this year. This will allow users to initiate direct bank to bank UPI transfers from the chat app itself.

WhatsApp already has 1 billion daily active users and it has over 200 million monthly active users in India. Thus, including a UPI-based payment solution right in the app, will prove to be a challenge to other wallets present in the market. This is why Paytm has introduced its latest in-app messaging platform so that it would be able to give a stiff competition to WhatsApp Pay feature. However, the app itself has not matured as of now and there is room for improvements. Frankly, most of the features included in the app is a blunt copy from WhatsApp messaging application. So, it would be interesting to see who well does this feature works for Paytm in the coming months.