The listing was first spotted by MySmartPrice. As per the listing, the Oppo CPH1931 will be powered by octa-core Qualcomm Snapdragon 665 processor. The smartphone will feature a 6.5-inch screen with an HD+ display resolution and a big 5,000mAh battery. 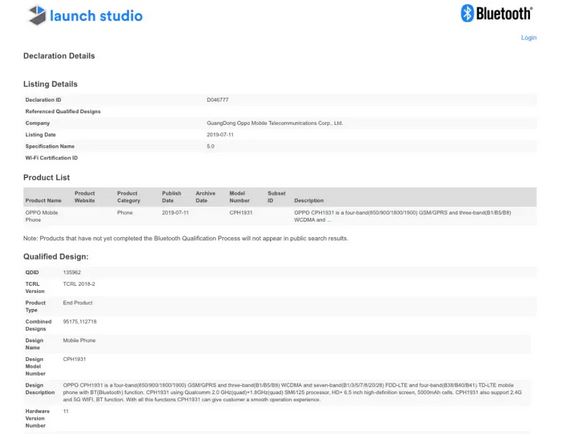 The Bluetooth certification further reveals that the smartphone will run ColorOS 6.0 with Android 9 Pie out of the box. In terms of connectivity, the handset has quad-band 2G, tri-band 3G, 7-band FDD-LTE, and quad-band TD-LTE  as well as Bluetooth 5.0 and dual-band Wi-Fi b/g/n/ac.

As of now, apart from these features, no more details about the OPPO CPH1931 are known. Since the phone has now passed a certification site, we expect the phone to be announced in the coming days.

Samsung to sell its 5G Exynos chipsets to Vivo, Oppo

Oppo K3 confirmed to launch in India on July 19