The specifications for the Oppo K9s have been leaked online which suggest it could be powered by the Snapdragon 778G. 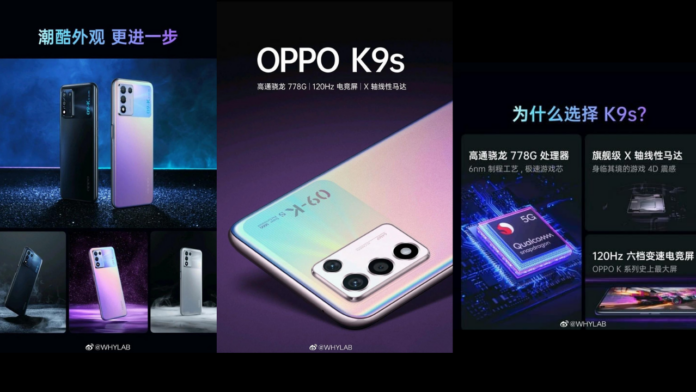 Oppo K9s could be the company’s latest upcoming smartphone under the K series. The details for this smartphone have now appeared online suggesting the chipset it could be powered by, and other details such as a 120Hz refresh rate display.

The posters of the Oppo K9s have been shared by Chinese tipster Why Lab on Weibo. These posters reveal the upcoming Oppo K9s should have a 120Hz display with a Snapdragon 778G under the hood. You will get an X-axis linear motor for enhanced 4G in-game vibrations. It should be launched in three color variants including black, silver, and purple.

The specifications for the Oppo K9s have also emerged via a TENAA listing. The K9s will have a PERM10 model number and should sport a 6.59-inch FHD+ panel with a resolution of 1080 x 2412 pixels. The device will be powered by the Snapdragon 778G chipset.

The Oppo K9s will be coming with 128GB and 256GB storage options with 8GB or 12GB of RAM. The phone should also support storage expansion via MicroSD. It could be backed by a 4880mAh battery with 44W fast charging support that has been revealed via a 3C listing.

As for optics, you should have a 64-megapixel + 8-megapixel + 2-megapixel triple camera setup. On the front, you should be getting a 16-megapixel selfie camera. Additional features include Android 11 and a side-mounted fingerprint scanner.

The MediaTek Dimensity 1200 SoC powers the smartphone. In addition, the phone packs up to 12GB RAM and offer up to 256GB of storage.