Oppo K3 will be fueled up by 3700mAh battery with support for VOOC 3.0 fast charging and it will run Pie operating system coupled with the latest ColorOS 6.0 UI.

Oppo is all set to launch a new K-series smartphone dubbed as Oppo K3 in China on May 23. The company has now posted the launch teaser on its Weibo handle confirming the launch on the said date.

As per the reports, the Oppo K3 will be priced between 1,000 yuan and 2,000 yuan. The phone will be announced in Nebula Purple and Black colour options. 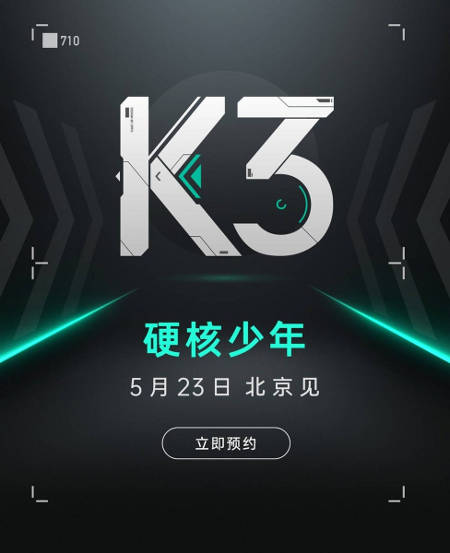 As per the earlier leaked specs, Oppo K3 will feature a 6.3-inch AMOLED display that will offer full HD+ resolution of 1080 x 2340 pixels. The notch-less screen phone will have an in-display fingerprint scanner and it will come with a pop-up selfie camera design. It will be powered by Qualcomm Snapdragon 710 processor which will be coupled with 6GB RAM with 128GB internal storage and 8GB RAM with 128GB internal storage.

Oppo K3 will be fueled up by 3700mAh battery with support for VOOC 3.0 fast charging and it will run Pie operating system coupled with the latest ColorOS 6.0 UI. For the optics, the phone will come with a dual rear camera setup of 16-megapixel and 2-megapixel sensors. The phone will have a 16-megapixel front-facing camera.  The phone will reportedly measure 161.2 x 76 x 9.4mm, while the weight of the Oppo K3 is tipped to be 191 grams.

Renders of the smartphone were leaked online yesterday revealing its front as well as rear design also. The renders also revealed that the phone will be equipped with a notch-less display and a pop-up selfie camera. Prior to this, Oppo K3 was spotted on China Telecom website’s product library confirming its full specifications.