The Oppo F3 will come with a dual-camera setup which includes a 16-megapixel camera and an 8-megapixel with 120-degree wide-angle view.

Oppo is all set to launch its next selfie-focused F series – the F3 smartphone in India on May 4 in association with Tollywood film, Baahubali. Now ahead of the launch, the specifications of the smartphone have been leaked by AndroidPure.

As per the leak, the Oppo F3 smartphone features a 5.5-inch Full HD display with Corning Glass 5 protection and a screen resolution of 1920 x 1080 pixels. The device is powered by an octa-core Mediatek MT6750T processor along with Mali T860. The phone is backed by a 4GB of RAM and 64GB of internal storage, which can be expanded up to 128GB via microSD card slot. The device runs on Android 6.0 Marshmallow with company’s ColorUI 3.0 running on top of it. The smartphone gets its power from a 3,200mAh battery with no support for fast charging. However, we expect that the smartphone will have company’s exclusive VOOC Flash Charge.

The Oppo F3 will come with a dual-camera setup which includes a 16-megapixel camera and an 8-megapixel with 120-degree wide-angle view. For the rear, the smartphone boasts a 13-megapixel shooter with full HD 1080p video recording. The smartphone also comes loaded with a front-facing fingerprint sensor. On the connectivity front, the device support 4G VoLTE, Wi-Fi 802.11 a/b/g/n/ac, Bluetooth 4.1, GPS and Hybrid Dual SIM (Nano + Nano) . The phone measures 153.3 x 75.2 x 7.3mm and weighs about 153 grams.

Meanwhile, the Oppo F3 with model number Oppo CPH1609 has also been now spotted on GFXBench and GeekBench benchmarking websites. The specs of Oppo F3 in the GFX listing are in line with the specs revealed in the GeekBench listing. A short 10-second video has surfaced on the YouTube channel of Slash Leaks to reveal the alleged OPPO F3.

As per the listing on GFXBench, Oppo F3 has a 5.5-inch full HD display with 1920×1080 pixels resolution and 5 finger gesture support. It is powered by 1.5 GHz octa-core Mediatek MT6750T processor and 4GB RAM. It offers 64GB of internal storage out of which 52GB will be reserved for the users. Besides, it has ARM Mali-T860 GPU and Android 6.0 Marshmallow operating system. 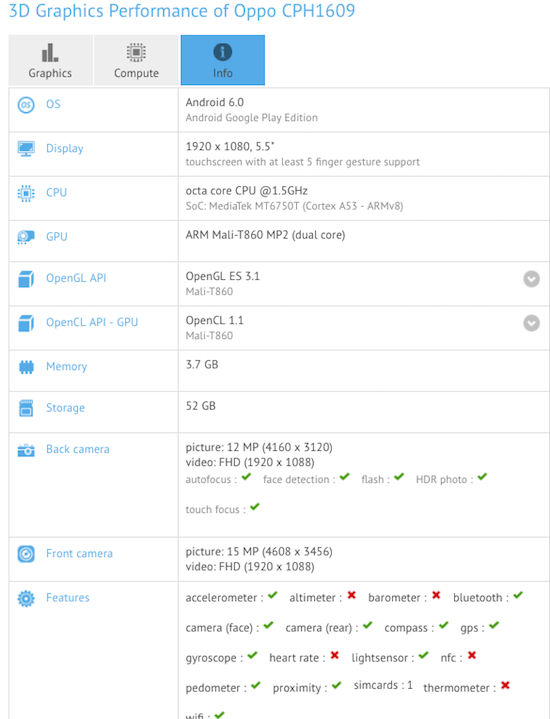 Oppo F3 has a 13-megapixel autofocus camera and a LED flash on its rear panel while a 16-megapixel camera in its front. The GFX listing shows that the device has connectivity features like Bluetooth, GPS, and WiFi. As per the listing, the device has an accelerometer, gyroscope, light sensor and proximity sensor as well. 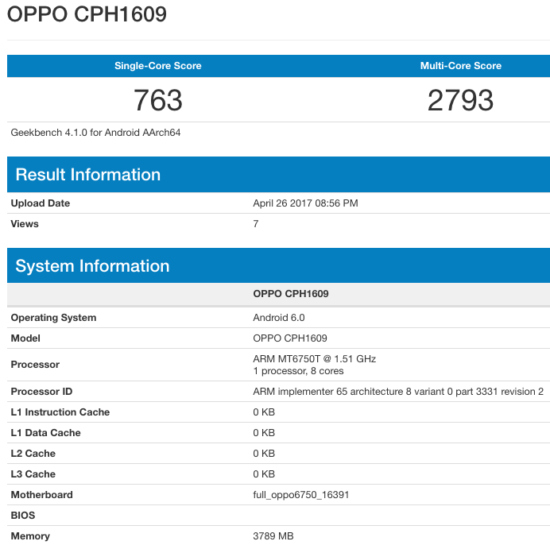 In the GeekBench listing, the Oppo F3 got 763 points in single-core test and in muli-core test it received 2793 points. As per the listing on Geekbench, the Oppo F3 has 4GB RAM and 1.51 GHz octa-core processor. The handset is based on the Android 6.0 Marshmallow operating system.