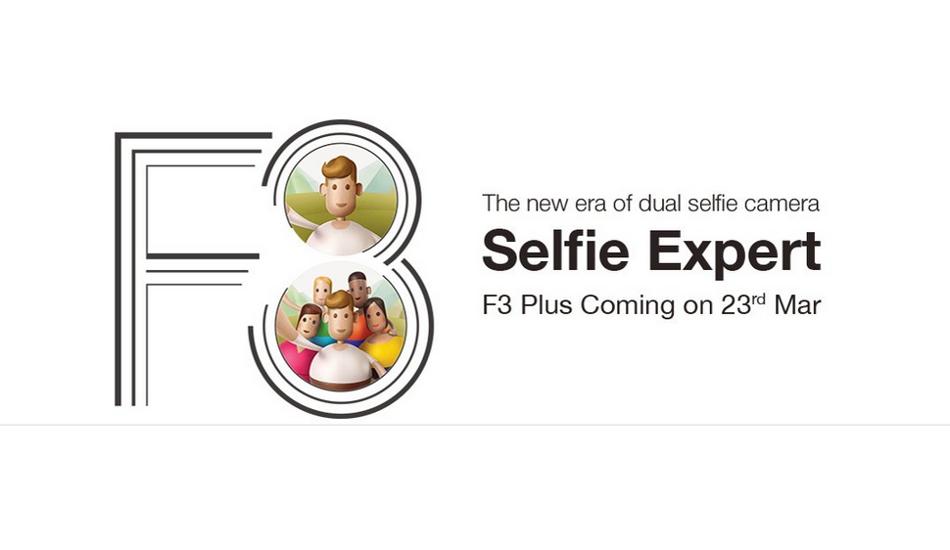 There is a strong possibility that company might also launch Oppo F3 as well, along with Oppo F3 Plus.

As anticipated, Oppo has finally announced to launch Oppo F3 Plus smartphone boasting dual front camera setup across five markets, which includes India, Indonesia, Myanmar, Philippines and Vietnam on 23rd March. Company has also confirmed that the said smartphone will have 16-megapixel front camera along with an 8-megapixel secondary front camera to achieve depth of field (Bokeh).

There is a strong possibility that company might also launch Oppo F3 as well, along with Oppo F3 Plus, which were recently spotted in promotional ads which were displayed in one of the retail stores in the Philippines.

As of now the company has not revealed anything else except the front camera details of F3 Plus smartphone. However there are some rumoured specifications for Oppo F3 and F3 Plus were doing rounds online.

Oppo F3 rumoured to feature a 5.5-inch HD Super AMOLED display and will be powered by a Snapdragon 653 SoC. It will come with 4GB of RAM and 32GB of internal storage. The smartphone will run on Android Nougat operating system. On the camera front, it will hace a 13-megapixel sensor with LED flash and an 8-megapixel selfie camera. Futher it is said to be armed with qualcomm’s Snapdragon 616 octa-core processor.

On the other hand, the Oppo F3 Plus is rumoured to feature a 6-inch Full HD display with Corning Gorilla Glass 5 protection. It is likely to come with a 4GB of RAM and 64 GB of internal storage with an option to expand the storage up to 256GB via microSD card. It will be powered by an octa-core Snapdragon 653 SoC. On the camera front, the smartphone confirmed to come with a combination of 16MP + 8MP camera sensors on the front and expected to sport a 16-megapixel shooter with PDAF on its back panel. The F3 Plus will get its strength from a 4000mAh battery with Super VOOC fast charging technology and will run on Android Nougat operating system with Color OS 3.0 on top of it. It will measure 163.63 x 80.8 x 7.35 mm and weighs 185 grams.As of now, these are just the rumoured specifications, so we advise our users to take this with a grain of salt.

Share
Facebook
Twitter
WhatsApp
ReddIt
Previous articleSamsung Galaxy A5 (2017), A7 (2017) set to go on sale today: Everything you need to know
Next articleXiaomi Redmi 4A smartphone expected to launch in India on March 20
RELATED STORIES