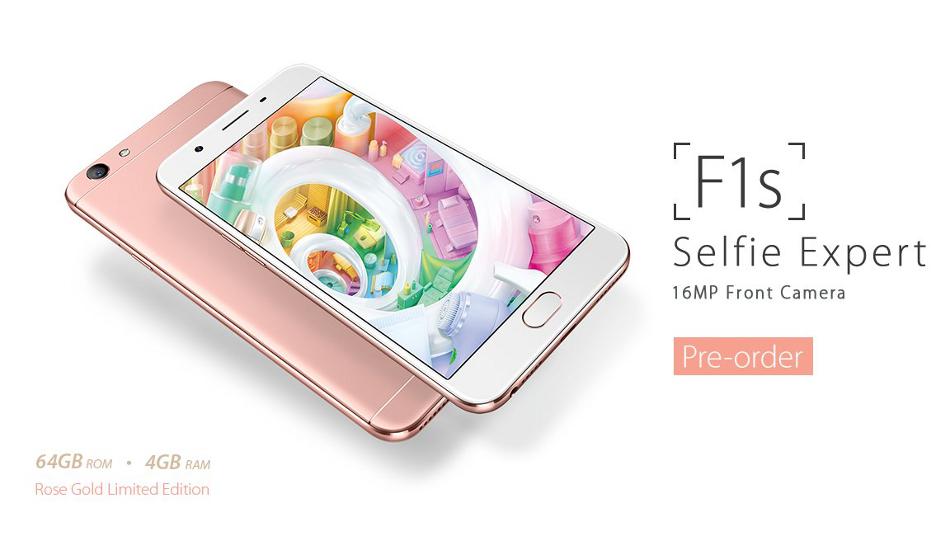 The Rose Gold option is only up for 4GB RAM variant as of now and will exclusively be available for purchase through Flipkart.

Oppo F1s smartphone with 4GB RAM and 64GB ROM was launched in November last year at Rs 18,990. Back then, only Grey and Gold colours options were introduced, however, now the company has come up with a new Rose Gold Limited Edition colour variant as well. The Oppo F1s Rose Gold for the 4GB RAM variant is now up for pre-order exclusively through Flipkart and the sale will start from 10th February.

The device also comes with 3GB RAM and 32GB ROM which was launched way back in August 2016 for Rs 17,990. This variant comes is only Grey and Gold colours options.

As far as other specifications are concerned, the Oppo F1s features a 5.5-inch HD (720p) IPS display with Corning Gorilla Glass 4 protection. It is powered by a 1.5GHz octa-core MediaTek (MT6750) processor, along with Mali T860 GPU. It can hold up to 128GB expandable storage via microSD card. The smartphone get its juice from a 3075 mAh non-removable battery. The smartphone also houses a fingerprint scanner that claims to unlock the phone in just 0.22 sec and it can be used to unlock the apps as well.

On the camera front, it has 16-megapixel selfie camera which comes with 5P lens, and f/2.0 aperture, On the back it flaunts 13-megapixel shooter with LED Flash, PDAF, and f/2.2 aperture. Besides, the phone runs on Android 5.1 Lollipop which is wrapped under with ColorOS 3.0 user interface. Other than that the Oppo F1s offers 4G LTE connectivity with VoLTE support, WiFi (802.11 a/b/g/n), GPS, Bluetooth 4.0, and a microUSB port. The handset measures 154.5 x 76 x 7.38 mm and weighs 160 grams.