Oppo A17k launched in India: Top things to check out

Oppo A17k has been launched in India and here are the top things to look for. 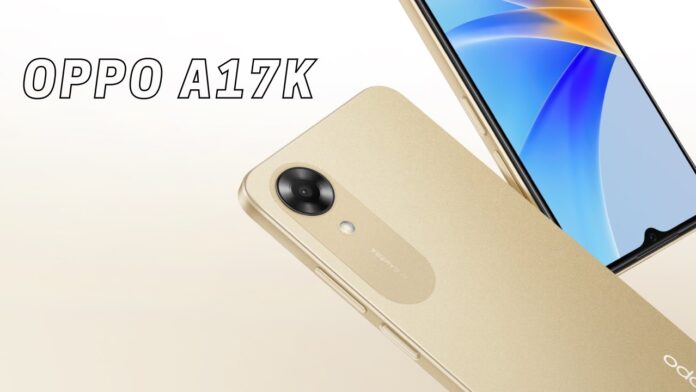 Oppo launched the Oppo A17 in India earlier this month as a budget offering and now, an even cheaper counterpart to the device is being launched in India, called the Oppo A17k. The new budget smartphone has some interesting features to look forward to and we’ll be discussing about those below.

The Oppo A17K is listed on Oppo India’s official website for Rs 10,499. It is only available in single variant with 3GB RAM and 64GB storage. The colour options are limited to navy blue and gold. The device is currently listed with the ’Coming Soon’ tag so it is unclear as to when it will go on sale.

The Oppo A17k sports a 6.56-inch IPS LCD display with a teardrop notch display. It has an HD+ resolution of 720 x 1600 pixels, a 60Hz refresh rate, and a 269ppi pixel density. It has a touch sampling rate of 120Hz which should make daily operations smoother as the touch is registered faster on the panel.

Further, it has Panda glass protection and 600 nits of peak brightness about which we are unsure as to how it would perform under extreme sunlight conditions. There’s 96% NTSC coverage which in theory should enable vivid and vibrant viewing experience on the display.

The A17k is powered by the same chip as its elder sibling, and that is the Helio G35 processor. The Oppo A17k gets 3GB LPDDR4x RAM and 64GB of eMMC 5.1 storage which is expandable as well.

The Helio G series processors from MediaTek are capable for smooth handling of daily tasks but anything that demands a lot of power should be avoided on devices with the Helio G35 chip as it isn’t very capable in that area as per our experience.

The A17k packs a 5000mAh battery with support for USB-C charging. While there’s no mention of fast charging support, we assume the device doesn’t come with it and has standard 10W speed. While it would definitely take more than an hour to charge, the device should easily last you more than a day on light usage considering Oppo’s ColorOS is well optimised and is in sync with the chip.

The Oppo A17k drops a camera sensor when compared to the Oppo A17, and gets a single 8MP sensor with f/2.0 aperture. At the front, there’s a 5MP sensor for selfies. As it is with every smartphone out there, we will first have to check the device ourselves to come to a conclusion whether it is a good performer or not.

As for additional features, the device is IPX4 rated which means it should be able to withstand a few splashes and should ideally survive in rain. The device also has a side-mounted fingerprint sensor for security. Connectivity options include 4G VoLTE, WiFi 802.11b/g/n, Bluetooth 5.0, GPS, and a 3.5mm audio jack.