OnePlus has today announced a price cut of Rs 2,000 for its OnePlus 3T smartphone via its official twitter handle. OnePlus 3T 64GB was launched in India last year at Rs 29,999. Notably, the price cut has been announced valid for only offline stores including the OnePlus Kiosks in NCR and the OnePlus Experience Store which is currently situated in Bengaluru. Also, the price cut is valid only for limited time as the offer is valid only from 10th – 12th July. 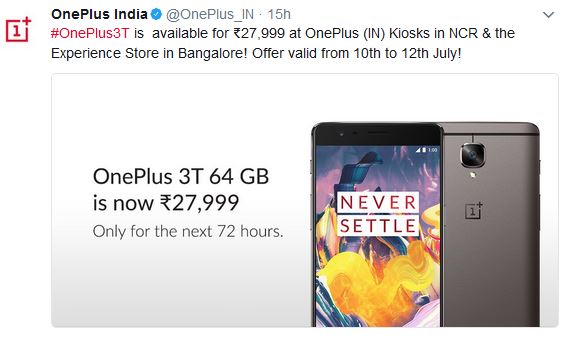 Kindly note that the price drop is not valid for online channels like Amazon India who is still selling OnePlus 3T at Rs 29,999. However, Amazon is all set to hold its first Amazon Prime Day Sale in India today from July 10 – July 11 where it might also offer discount on OnePlus 3T.

Quickly briefing out the specs, the OnePlus 3T comes with a 5.5-inch Full HD 1080p Optic AMOLED display which is 2.5D curved. On the inside we get, Qualcomm’s Snapdragon 821 chipset clocked at 2.35GHz with Adreno 530 GPU along with a 6GB of RAM. For the camera, the device sports 16-megapixel cameras both at the front and back while for the battery the device sports 3400 mAh Li-ion non-removable battery. OnePlus 3T offers Dual SIM functionality, however, you don’t get an option to expand the given internal storage.

Pete Lau, Founder and CEO of OnePlus also revealed that Android update for OnePlus 3T and 3 will soon be rolled out. Ever since its launch, OnePlus 3T have got a lot of praise from the masses and tech media for its performance and value for money proposition.