Nokia T20 Tablet goes on sale, can it take on competition in India?

Nokia T20 has went on sale in India via Flipkart starting today. But does it have better features and specs than its competitors? 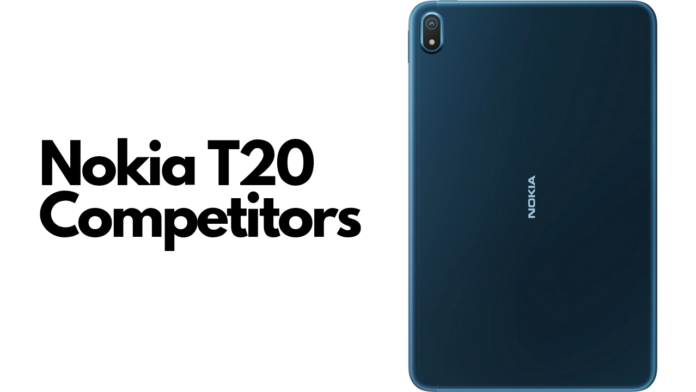 It doesn’t seem to have the best specifications for the price, but it can be considered average. However, we do have some other options available as well in the market within this price range. So will the Nokia T20 be able to beat them, or does it still have a lot to gain? Let’s have a look.

Realme Pad is the first-ever tablet from the Chinese brand, and the LTE model of the tablet comes in 3GB+32GB and 4GB+64GB variants. They are priced at Rs 15,999 and Rs 17,999, respectively. The Wi-Fi only variant will cost you Rs 13,999 with 3GB RAM and 32GB internal storage. It comes in Grey and Beige colours.

To put things in perspective, we have already mentioned the top 5 reasons to buy the Realme Pad, but we’ll repeat them for you as it is one of the most value for money tablet in its segment. The Realme Pad sports a 10.4-inch display with a resolution of 2000 x 1200 pixels which is high enough for a display this big.

A MediaTek Helio G80 SoC powers the tablet under the hood. The chipset is paired with up to 4GB RAM and 64GB internal storage. The tablet is 6.9mm thick. It has a single rear camera module—both the front and rear camera modules house 8MP sensors each. The tablet comes with a Smart Connect feature that lets you pair it with wearables and Realme TV to project the screen.

The tablet is equipped with quad speakers for audio. In addition, there will be support for DTS HD and Hi-Res Audio. For the battery, the Realme Pad will pack a 7,100 mAh battery. The tablet will support 18W charging over USB-C.

The MediaTek Helio G80 is slightly better in terms of performance than the Unisoc T610 SoC. Further, you get a smaller battery on Realme Pad than the Nokia T20 but faster charging with a smaller battery help you top up the tablet even faster. Secondly, where you get stereo speakers on Nokia T20, a quad-speaker setup on the Realme Pad results in louder and more fuller sound.

Next, you get up to 512GB storage expansion on Nokia T20, but you get a 1TB expansion on Realme Pad. Moreover, Realme Pad also supports reverse charging, so you can charge other devices of yours using your tablet. However, Nokia T20 does get some things better, including an IP52 rating.

While you get less RAM, the Galaxy Tab A7 still has some decent specifications up its sleeve. Samsung Galaxy Tab A7 tablet comes with a 10.4-inch WUXGA+ display with a screen resolution of 2000 x 1200 pixels, 80% screen to body ratio, symmetrical bezel and a premium metal finish.

The tablet is powered by an octa-core Qualcomm Snapdragon 662 processor along with Adreno 610 GPU. In addition, the device comes with 3GB of RAM and up to 64GB of internal storage, which can be further expanded up to 1TB via a microSD card slot.

On the camera front, the Galaxy Tab A7 features an 8-megapixel rear camera with LED flash, while for the front, there is a 5-megapixel shooter. The tablet is loaded with a 7040mAh battery with adaptive fast charging and it runs on the Android 10 operating system. In terms of connectivity, it supports 4G LTE (Optional), Wi-Fi 802.11 ac (2.4GHz/5GHz), Wi-Fi Direct, Bluetooth 5 LE, GPS, GLONASS, USB 2.0 Type-C and single-SIM slot.

Here again, you get a smaller battery compared to Nokia T20, but with Samsung tablets, you get a better overall software experience with better functionality and more features. Also, you get a quad-speaker setup with this one compared to two speakers on Nokia T20.

The TCL 10 Tab Max comes with a 10.36-inch Full HD+ display and it comes with a stylus support as well. The stylus also features ultra-low latency mode. In addition, it comes with advanced dual-microphone systems along with dual speakers for high-definition video calls. The front sports an 8-megapixel selfie shooter. The rear panel comes with a 13-megapixel shooter.

The TCL 10 Tab Max is loaded with an 8000mAh battery and it comes with an octa-core processor along with 4GB of RAM and 64GB of internal storage. In addition, the memory can be further expanded up to 256GB via a microSD card slot.

With this one, you get stylus support and better cameras as far as on-paper specifications are concerned. You also get faster charging at 18W that will juice up the tablet faster.

As you can see, a bunch of other alternatives for the Nokia T20 are available in the market that certainly offers better features or specifications in specific areas. Indeed the T20 from Nokia is a decent step forward in the tablet segment, but it does have to catch up on some things.