Nokia has unveiled its NFC enabled smartphones in India with Symbian Belle update. NFC or Near Field Communication is a short wave wireless technology that enables two NFC enabled devices to communicate with each other. This technology can be employed for mobile transactions. The new Nokia handsets are Nokia 700, Nokia 701 and Nokia 600.

Symbian Belle, which is the update of recently introduced Anna update, brings important improvements to the Nokia handsets that include NFC technology, faster web browsing experience, 1 Ghz processor, increase in number of home screens for improved display of applications and services, and live widgets in five different sizes. The update will be available to other Nokia handsets in coming time. 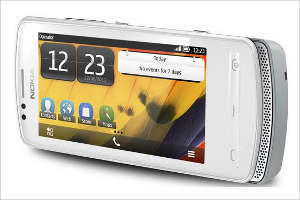 Nokia 700 is touted to be the world’s smallest smartphone and was previously codenamed as Zeta. Flaunting a 3.2 inch Amoled “ClearBack” display with Gorilla Glass with 320×640 pixel resolution, this handset houses a 1Ghz ARM design based processor. This handset is said to be made using recycled metals and bio-plastics. It will come in five different colours. At the rear, Nokia 700 features a 5 megapixel full focus camera that is capable of recording 720p HD video at 30fps.

Nokia 700 features Bluetooth 3.0 that promises faster data transfer speeds (up to 24Mbit/s) and also consume less power compared to the previous generation Bluetooth 2.1 based devices. With up to 2 GB internal memory, the Nokia 700 handset comes with 1080 mAh battery and offers up to 7 hours of talk time on 2G and 4.5 hours of talk time on 3G. Nokia 700 comes with integrated GPS, Compass, Accelerometer and WiFi network support. 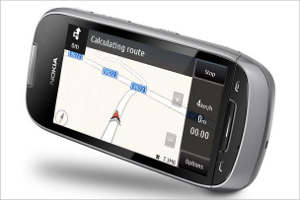 Claimed to be the brightest smartphone, Nokia 701 previously codenamed as Helen and comes with 3.5 inch IPS &#151 LCD ClearBack display with Gorilla Glass. The display comes with 16:9 aspect ratio and 360×640 pixel resolutions. This display supports multi-touch and comes with proximity sensor as well as accelerometer. Even this handset houses a 1 GHz processor. At the rear, the Nokia 701 has 8 megapixel camera with Dual LED Flash and 2X Digital Zoom. The camera is capable of recording 720p HD video at 30 frames per second and apparently comes with a front facing camera for video chat.

This handset features Stereo FM with RDS and Bluetooth 3.0 that promises low power consumption and higher data transmission speeds. This handset supports 3G as well as WiFi for speedy data connectivity. Its 1300 mAh battery offers up to 7 hours of talking time over 2G and about 6.5 hours of talktime over 3G Networks. Nokia will offer this handset in three colours. 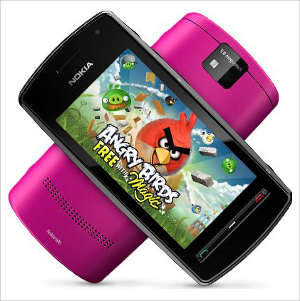 Priced at Rs 12,999, this phone is touted as the loudest smartphone with loudness of its speaker estimated at 106 Phons. Previously codenamed as Cindy, Nokia 600 comes with 3.2 inch TFT LCD display with 16:9 aspect ratio and nHD (360×640) pixel resolution. Even this handset comes with 1 Ghz processor to power the new Symbian Belle update. At the rear lies the 5 megapixel camera with full focus and capability to record 720p HD video at 30fps.

This handset too comes with Bluetooth 3.0 for high speed data transfer at low power consumption and WiFi network support for wireless data connectivity. Internationally, this handset comes with FM transmitter and internal FM Radio antenna but we need to check if it will be available for India as well.

Nokia 701 is already available across the country while Nokia 700 and 600 will be available starting October.

Meanwhile, Nokia has announced that it will offer content of the movie Ra.One through its priority stores. Nokia users just need to go to the nearest Nokia priority stores and tap their NFC enabled device with the Ra.One NFC tags.

Commenting on Ra.One’s association with Nokia, Shahrukh Khan, actor and brand ambassador, Nokia India said, “There is great synergy between Ra.One and Symbian Belle as they both represent technology of the next level. I am delighted that Ra.One will be the first movie in the country to be marketed through NFC. There are many path breaking initiatives that Nokia has undertaken with Ra.One that will allow the consumers to experience the world of Ra.One through ‘Just Tap’ with NFC feature on the Symbian Belle smartphones.