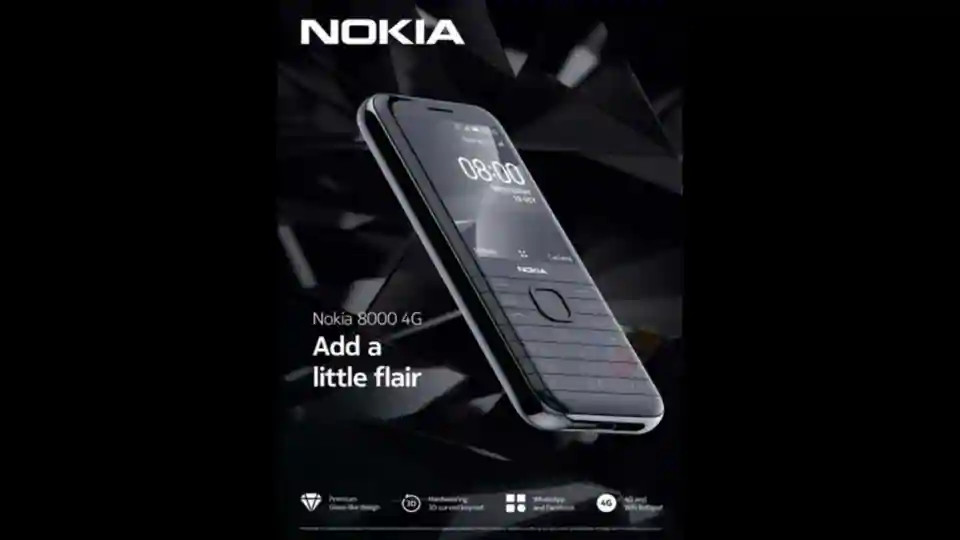 A recent leak had revealed that HMD Global is planning to launch Nokia 6300 4G and Nokia 8000 4G new feature phones. Now the design details of Nokia 8000 4G along with its key specs have surfaced online via a leaked poster.

As per the poster of Nokia 8000 4G shared by WinFutre, the phone won’t feature the slider design that was seen on the original Nokia 800 series phones. It will have a premium glass-like design and ‘3D curved’ designed keys. Compared to other feature phones, the Nokia 8000 4G will have curved edges.

For the specifications, the report says that Nokia 8000 4G feature phone will come preloaded with WhatsApp and Facebook. It will have support for 4G and Wi-Fi hotspot for connectivity. The handset is expected to arrive in single-SIM and dual-SIM versions.

The poster shows the phone in Black colour but it is expected that Nokia 8000 4G will come in more colour variants.

The phone will be sporting a 2.8-inch LCD display with 320 x 240 pixels resolution. It will be powered by Snapdragon 210 chipset coupled with 512MB of RAM and 4GB internal storage. For additional storage, the Nokia 8000 4G storage that can be expanded up to 128GB with a microSD card slot.