Nokia X7 aka Nokia 7.1 Plus will be powered by a 1.71 octa-core Qualcomm Snapdragon 710 processor. The phone will have a 6GB of RAM and Android 8.1 Oreo operating system.

HMD Global yesterday launched Nokia 3.1 Plus in India for Rs 11,499. The company was largely expected to launch Nokia 7.1 Plus.though at the event. Now the Nokia 7.1 Plus has been spotted on the Geekbench benchmarking website.

HMD Global is hosting an event in China on October 16th, where the company is expected to launch The Nokia X7 aka Nokia 7.1 Plus.

As per the GeekBench listing, the Nokia X7 aka Nokia 7.1 Plus will be powered by a 1.71 octa-core Qualcomm Snapdragon 710 processor. The phone will have a 6GB of RAM and Android 8.1 Oreo operating system. Sadly, the listing has not revealed any other specs of the upcoming smartphone. The listing was firstspotted by a Dutch publication named Telefoon abonnement. The listing of Nokia X7 shows a single-core score of 1,827 and a multi-core score of 5,937. 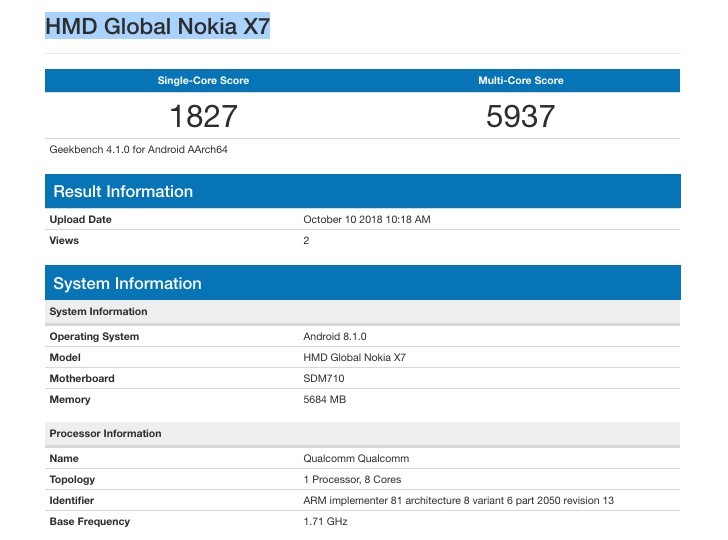 The TENAA listing of the Nokia 7.1 Plus showed a 6.18-inch Full HD+ display with a screen resolution of 2246 x 1080 pixels. The phone will be powered by a 2.0GHz octa-core processor, likely to be Qualcomm Snapdragon 710 chipset. It will likely to come in two memory variants: 4GB RAM with 64GB storage and 6GB RAM with 128GB storage. Both variants will be.expandable up to 400GB via micro SD card slot.

Nokia 7.1 Plus is rumoured to sport a 12-megapixel primary lens and 13-megapixel secondary sensor at the back. There will be a 20-megapixel front camera for selfies and video calling. It will reportedly run on Android 8.1 Oreo and will be backed up by a 3400mAh battery with fast charging support.