Mid-range Monsters: Nokia 7 Plus vs Oppo F7 vs Moto X4 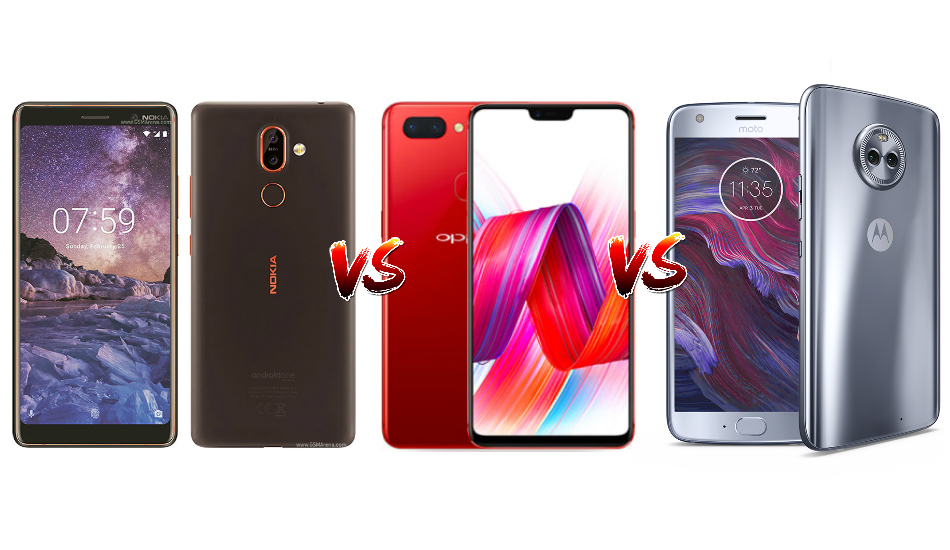 All three Android phones have been recently launched for a price of under Rs 27,000 in India.

HMD Global just announced the launch of Nokia 7 Plus in India which now adapts the industry trend of rocking a taller 18:9 FHD+ display that runs a resolution of 2160 x 1080 pixels. The device comes as a younger sibling to the much expensive Nokia 8 Sirocco which was also unveiled earlier today.

The Nokia 7 Plus puts up a real challenge to compact powerhouses from other manufacturers if not flagships. The device comes in a single variant that’s priced at Rs 25,999 which will sell start selling later this month. We decided to put the latest mid-ranger from HMD against the industry’s similar priced devices and found the Oppo F7 and Moto X4, which were the most recent phones in the same price segment. Here’s a comparison of these three sorted categorically.

The newest device of the lineup features an aluminium 6000 series body with copper edges which gives the HMD-made device all the elegance. Though metallic for the most part, the difference in metal structure with the copper lining will help the phone in being easily handy. Meanwhile, the Oppo F7 looks a lot like an iPhone with a consistent metallic back.

The Moto X4 in this aspect is completely different from the other devices in question and features a glass back with an aluminium frame. Thus the X4 offers a lot of grip for single-handed use but the fact that you’ll constantly need to wipe off your finger smudges will be an annoyance. Also to note is that the X4 is IP67 certified which means it is dust and water resistant to up to 1.5m for 30 minutes.

The Moto X4 simply falls short here with a 5.2-inches screen, which, while handy is simply not enough we reckon. The display itself is surrounded by thick bezels all around but the device does offer the best pixel density among the three at 424ppi.

The Nokia 7 Plus offers a taller 18:9 screen with a screen-to-body ratio of 77.2 percent which spans across the 6-inch IPS panel.

Oppo’s F7 could well be the first of the many devices in recent times to implement the dreaded notch from the iPhone X but has done quite well to impress the eye. The 6.23-inch LTPS IPS 18:9 display is also the largest of the three and offers the highest screen-to-body ratio of 82.5 percent.

Clearly, big is better in this case.

Nokia 7 Plus comes powered by a Snapdragon 660 processor which is the latest chipset from Qualcomm but goes a tad cheaper on other aspects of hardware. The device in its only configuration packs only 4GB of RAM and 64GB of onboard storage. Being the newest, it’s also the only device which rocks an Adreno 512 graphics unit and Bluetooth v5.0.

Powering the F7 is a MediaTek Helio P60 chipset with Mali-G72 MP3 graphics alongside 6GB of RAM and 128GB of internal storage that’s available in this price tag.

The Moto X4 rocks a solid Qualcomm Snapdragon 630 with Adreno 508 GPU which coupled with 6GB of RAM and 64GB onboard storage.

All three phones are connected with Wi-Fi 802.11 a/b/g/n/ac, dual-band, WiFi Direct and GPS but only the X4 and & Nokia 7 Plus feature NFC which enables them to make cashless transactions.

While the F7 still features the old micro USB 2.0 for charging and data, the X4 and Nokia 7 Plus are both equipped with Type-C 1.0 reversible connector, though the latter has connectivity through micro USB 2.0 as well.

Winner: Nokia 7 Plus, edging it!

Both the Nokia and Oppo devices run on the latest Android 8.0 Oreo but the 7 Plus features a cleaner stock interface compared to the F7 that has the company’s own ColorOS 5.0 on top.

Though the Moto X4 came with Android 7.1 (Nougat), the device has been upgraded to Android Oreo and will keep getting newer updates, thanks to it running on Android One. This means the X4 will get regular Android and security updates alongside Google’s own line of devices for a longer time to come.

The Oppo F7 is featured as a selfie-specific camera whose rear sensor is a 16 MP, f/1.8 lens with PDAF while the main front-facing snapper is a massive 25-megapixel camera of a f/2.0 aperture.

Winner: Both Nokia 7 Plus and Moto X4.

This is where the Moto X4 has no chances of competing for the top spot as all of its features comes packed with a mere 3,000mAh power unit which is downright insufficient. While the F7 features a slightly larger 3,400mAh battery, it’s the Nokia 7 Plus which seals the deal with its 3,800mAh battery that is estimated to last up to 19 hours on standby.

While the Moto X4 is a beast when it comes to living up to the expectations regarding its performance, the F7 and Nokia 7 are devices which also offer the latest design and a taller display with minimum bezels. Users would love the F7 for what it’s made to look like if not for the selfie camera. For the rest, the Nokia 7 Plus offers a premium looking smartphone with the best set of cameras with no compromises made on the hardware front either.

The Moto X4 is the cheapest of the three and is priced at Rs 24,999 followed by the Nokia 7 Plus which sells for Rs 25,999 starting April 30. The most expensive of these three is the Oppo F7 whose 128GB onboard storage variant comes at an asking price of Rs 26,990.
Strangely enough, all three seem to have been designed with a very specific audience group inmind, with the Oppo throwing all its bests behind a large screen and one good selfie camera. The Moto X4 promises standout performance at all times, if slightly weak lasting power. But it is the Nokia 7 Plus which seems to have been designed for the segment, packing in the most for its price.