Nokia 2 might feature a 5-inch HD display which will be powered by a 1.27 GHz Quad-core Qualcomm Snapdragon 212 processor.

As per AnTuTu listing, Nokia 2 features an HD display with a resolution of 720 x 1280 pixels with an unknown screen size and is powered by a Qualcomm Snapdragon 212 processor, along with Adreno 304 GPU. Further, as per listing, the smartphone comes with 1GB of RAM and 8GB of internal storage. The smartphone runs on Android 7.1.1 Nougat operating system. The listing has no information about its battery size. On the camera front, it has an 8-megapixel rear camera and for the front, the device will have a 5-megapixel camera. 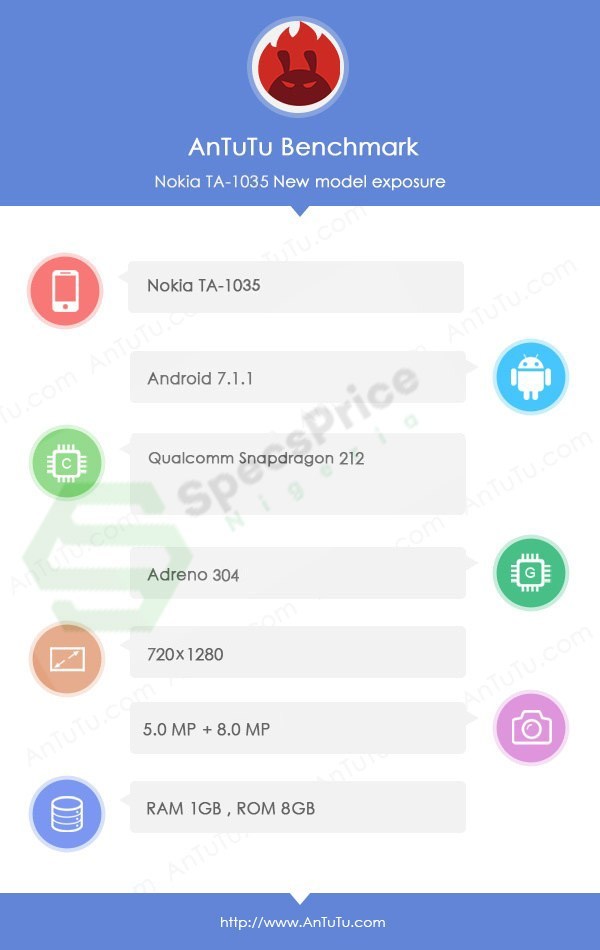 As per earlier leaks, Nokia 2 might feature a 5-inch HD display which will be powered by a 1.27 GHz Quad-core Qualcomm Snapdragon 212 processor. It will come with 1GB RAM, 8GB of internal storage and run Android 7.1.1 Nougat. It is said to feature an 8-megapixel rear camera and a 5-megapixel front camera. The smartphone is said to be available for just $99 (approx. Rs 6,439). It will reportedly come in Black and White colour options.

Meanwhile, HMD Global is gearing up to launch Nokia 7 in India on October 31, as the company has started sending out the media invites for the same. However, it is important to note that the company has not officially confirmed that it will be launching the device on the said date. As per reports, the Nokia 7 is said to be priced between Rs 25,000 and Rs 28,000 in the country.