Motorola has quietly announced a new Android 4.0 Ice Cream Sandwich running smartphone – Atrix HD. As the successor of the Atrix 2, the new Atrix HD features a 4.5-inch display with 720p HD native resolution. Housing a 1.2 GHz Dual-core mobile processor, this smartphone flaunts the RAZR styling and is claimed to be splash resistant. The back panel is built using Kevlar plastics. The Motorola Atrix HD is destined to release in the US through AT&T but there are no details on its worldwide availability and pricing.

Motorola has been working on Atrix 2 successor since a while and the first smartphone with 720p HD display was quiet expected from the company. The new Atrix HD features as 4.5-inch ColorBoost HD touchscreen display built using Corning Gorilla Glass technology. By default this screen offers 1280×720 pixel resolution and thereby you can easily watch your 720p HD content and high quality images comfortably. 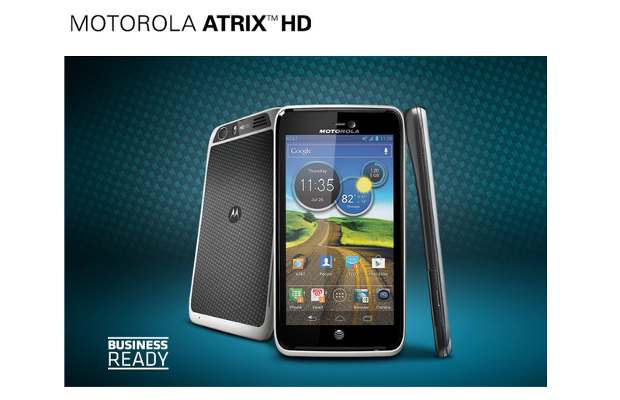 Under the hood, the smartphone features dual-core 1.2 GHz mobile processor with 1 GB RAM and features 8 GB ROM. Thankfully it offers expandable storage to accommodate up to 32 GB memory card. The Atrix HD has an 8.4 mm thin body and touts to be splash resistance. This smartphone too supports MicroSIM and supports 4G LTE networks.

At the rear lies an 8 megapixel camera with LED Flash and Auto focus that is capable of shooting 1080p HD video at 30 frames per second easily. In the front lies a 1.3 megapixel camera for video calling and chat. Other features of the Atrix HD include Accelerometer, Bluetooth 4.0, Proximity Sensor, micro HDMI out port and micro USB port.

Motorola has housed a 1780 mAh battery to make this powerhouse smartphone run for long time along with the SMARTACTIONS app. This app automates the routine activities set and defined by the user.