Motorola One Power running on Android Pie spotted on Geekbench

The smartphone has been now spotted on benchmarking website with the latest Android version.

Motorola One Power has been listed on Geekbench running on Android Pie operating system. The Geekbench listing reveals that the phone has got 1274 in single-core test and 4508 in multi-core test. This simply means that Motorola is currently testing the Pie update for its latest budget-centric smartphone. 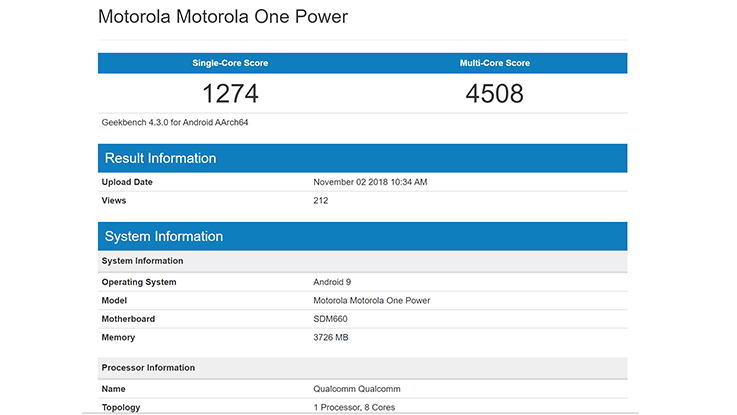 To recall, the smartphone was launched in India for Rs 15,999 and it is the first smartphone in India that comes with Android One programme. Recollecting some key specifications, the phone features a 6.28-inch Full HD+ Max Vision display with a screen resolution of 2246 x 1080 pixels. The phone is powered by a 1.8GHz octa-core Qualcomm Snapdragon 636 processor coupled with an Adreno 509 GPU. It packs a 4GB of RAM and 64GB of internal storage, which can be further expanded up to 256GB via microSD card slot.

For optics, it is equipped with a dual-camera setup with a combination of a 16-megapixel primary lens and a 5-megapixel secondary lens. For the front, there is a 12-megapixel shooter for selfies and video calling. The One Power is equipped with a 5000mAh battery and it runs on Android 8.1 Oreo that delivers a stock Android experience. Connectivity options include 4G VoLTE, 4G LTE, Wi-Fi 802.11ac, Bluetooth v5.0, GPS/ A-GPS, USB Type-C and a headphone jack.